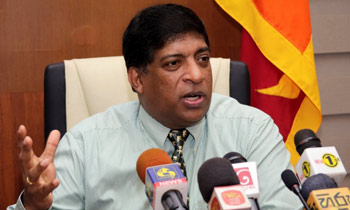 He said those who worked full time to prevent the formation of the good governance government later joined the same administration and their current attempt to put the government in trouble is clear evidence of their malice.

The minister paid homage to the Dalada Maligawa and later paid courtesy calls on the Mahanayake Theras of the Malwathu and the Asgiri Chapters and received their blessings. Mr. Karunanayake told the media, outside the temple, that he was taking directives only from the president and the prime minister. He said he was not ready to be dictated to by ministers.

He said the duty of the government was to implement the mandate given by the people and criticism by certain persons who got ministerial positions through bargains was futile.

He said the budget allocations for some of inactive ministries had been cut and the relevant ministers were complaining, but he was not going to answer such calls made due to abdominal pain. He added that the government was making a people friendly journey by cutting taxes and minimising waste and corruption.

He said the country would fall into crisis if the government was going to work according to the statements issued by some provincial governors and chief ministers and that the president and the prime minister were doing enough according to the Constitution and protecting the sovereignty of the country while maintaining harmony among all communities.

“The good governance has walked an extra mile to restore not just five-star democracy but seven-star democracy in the island. Neither white-van culture nor abductions are reported today. No incident of assault is reported either. However, the process of bringing the perpetrators to book for the irregularities committed during the previous regime is delayed because i is being done according to the law,” he said.

The minister told the two Mahanayakes that the proposals made by them to be considered for Budget 2017 had been included. The Mahanayakes had proposed that a monthly stipend be granted to student monks. He said a mechanism to pay the stipend would be worked out on the advice of the Mahanayakes.

Responding to the minister, the Malwathu Mahanayake said that a country cannot move without revenue. He said that it was the responsibility of the government to maintain reasonable prices of essential commodities despite various public tariffs.

Mr. Karunanayake said the present government had taken measures to bring down the prices of 24 essential items.