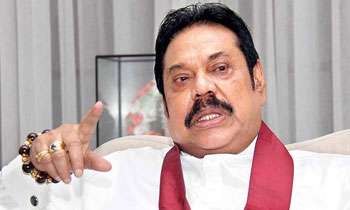 If a sniper rifle belonging to the Police Department has gone missing it is a serious matter, former president Mahinda Rajapaksa told the media at his Carlton residence in Tangalle today after participating in a Poya Day programme.

“If such weapons go missing from institutions such as the Police it causes much concern because nobody knows against whom will be used. It is a dangerous situation when one hears the news that the President and the former defense secretary are to be assassinated. Why is no action being taken against the suspects when there is evidence about a plot to assassinate important personalities,” Mr. Rajapaksa said.

He voiced concern about the rising value of the US dollar affecting the economy with car prices increasing and imported food items such as lentils and sugar costing more.

Mr. Rajapaksa said during his tenure these items were not imported.

“My government had built up buffer stocks of sugar which were not released to the market. This government lacks management skills. Urgent steps must be taken, by the Central Bank, the Ministry of Finance and other relevant government authorities to curtail the crisis situation,” he said and added that the underworld was raising its head not only in the South but within the entire country. People are being killed every day and this government is helpless in stopping this situation.

Mr. Rajapaksa said the provincial council elections were in a quandary because hapazard changes are being introduced to please various political parties.

“Its a funny situation when the subject minister presents the PC elections Bill in Parliament and votes against it. Ranil Wickremesinghe has no clear plan and living in a world of make-believe,” he said. (Anisha Manage)