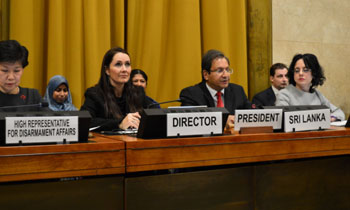 Sri Lanka hoped to remain proactively engaged within the Conference on Disarmament (CD) to help achieve its objectives, Sri Lanka’s Permanent Representative to the UN in Geneva Ambassador Ravinatha Aryasinha said on Tuesday on the occasion of Sri Lanka assuming the responsibility of the CD as its first President of the 2018 session.

Sri Lanka assumed the Presidency of the CD after 11 years.

In his speech, Ambassador Aryasinha said the CD held a significant responsibility with regard to a rule-based international order that Members of the UN family were seeking to uphold.

“The CD’s continued inaction sets a negative precedent by not measuring up to effectively preventing or responding to new and emerging security challenges through the adoption of appropriate international instruments. Therefore, it is time to avoid the temptation of subjecting the work of this Conference to the vagaries of the ever-changing international strategic landscape, and instead we must endeavour to harness its potential to build common ground to achieve collective security,” he said.

Sri Lanka called on member States of the CD to seek to bring back the necessary attention at the highest political levels to the CD in order to maintain the integrity and credibility of the Conference, as well as to create forward movement and momentum.

Addressing the plenary, Ambassador Aryasinha noted that Sri Lanka assumed the Presidency of the Conference “At a time this august body has critical challenges and some opportunities before it”.

He said the challenges include the prevailing complex global security environment, the increasing threat posed by non-State actors – with global anxieties about nuclear weapons at their highest since the end of the Cold War, the advancement in military technology, as well as parallel discussions and deliberations that are taking place outside the Conference.

Ambassador Aryasinha said to enhance international security, the pace of multilateral disarmament and non-proliferation must be accelerated, “taking into account the security interests of all States and on the basis of the principle of undiminished security for all”.