You are here: Home / Breaking News / SL is in talks to offer the Trinco port to India: Fonseka – Daily Mirror 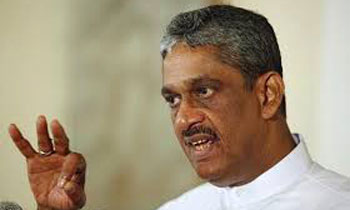 Sri Lanka is in talks to offer the port of Trincomalee to India. Speaking to The Hindu on the sidelines of the Raisina Dialogue here, Field Marshal Sarath Fonseka, Colombo’s Minister of Regional Development, said that the decision on offering the port to India will be taken soon.

“Talks are at present going on between India and Sri Lanka and we hope to offer the Trincomalee port, which is one of the best deep sea ports in the world, to India,” said Mr. Fonseka speaking to The Hindu on the sidelines of the Raisina Dialogue. Trincomalee has been on the table for sometime as Sri Lanka wants to maintain a neutral stand and provide equal access to its ports to both China and India.

Sri Lanka’s experience with the Chinese, who carried out major infrastructural work at the Hambantota port in southern coast of the island nation, has put a heavy burden on the country, said Mr Fonseka.

“Our experience [with the Chinese] on Hambantota has not been very beneficial as we are facing a heavy debt burden due to the work done in that port. The problems and corruption in the project prompted us to review our policy on infrastructural development. We have currently given the port to a private entity so that some of the more immediate issues are resolved. This arrangement will also address India’s security concerns,” said Mr. Fonseka, indicating that Sri Lanka is willing to address India’s concerns on the visit of Chinese nuclear submarines to Sri Lanka.

The port of Hambantota was conceived as a major Sri Lanka-China project during the presidency of Mahinda Rajapakse, but the controversy around the debt burden has slowed down the project.

Speaking at the Raisina Dialogue, Mr. Fonseka, who led the Sri Lankan defence forces during the 2009 Eelam war against Tamil rebels, said that Colombo is aware of its responsibilities in the Indian Ocean region, and is committed to freedom of navigation.

Field Marshal Sarath Fonseka said that Sri Lanka will remain committed to the fight against terrorism and extremist violence in the region and beyond.

Recollecting the fight against the Tamil Tigers, he said that insurgency often receives extra-territorial support, and pointed at the support for the Tamil Tigers from India.

“Some political parties and leaders from the southern part of India, extended support to the Tamil rebels at the time of the war due to narrow political interests,” he said.