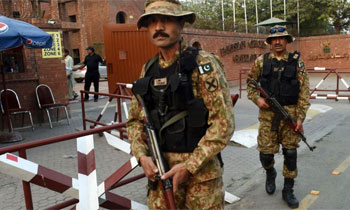 The Sri Lankan cricket team arrived at Lahore's Allama Iqbal International Airport in the early hours of Sunday to play the the final Twenty20 international match at a heavily-guarded Gaddafi Stadium.

According to Pakistan DawnNews the team received a warm welcome in the city and was escorted to the hotel amid tight security.

Sri Lankan Captain Thushara Perera expressed joy upon his arrival in Pakistan and said that his team would try and give their best on the field today.

Pakistan Skipper Sarfraz Ahmad, in a video message, thanked the Sri Lankan team for returning to Pakistan and told fans to expect great cricketing spirit from both sides in tonight's showdown, DawnNews said.

Asanka Gurusinha and Hashan Tillakaratne two of Sri Lanka's survivors in the 2009 attack that killed eight have also arrived at to Lahore again as team manager and batting coach respectively.

Cricket-starved fans have bought tickets in large numbers to witness Sunday's match despite the series already being won by Pakistan.

“What's important to me is that we are hosting an international match and show the world that it's safe to play in Pakistan,” said Ghulam Abbas, a college student. “I think after the West Indies tour, the doors of international cricket will be wide open in Pakistan.”

“The security officials are trying their best to ensure that the match is played in a secure environment,” he said. “All institutions, as well as the Sri Lankan squad, are satisfied with the security arrangements.”

The traffic plan has been laid out ahead of the match and four points have been marked for parking for spectators, which include Punjab University hostel and Liberty LDA Parking Plaza. More than two thousand traffic wardens have been appointed for duty.

Vehicles will not be allowed to pass from Ferozepur Road to Liberty Chowk. The route from Muslim Town Mor to Kalma Chowk will also be closed for traffic. M.M. Alam Road, however, will be open for all kinds of traffic.

Several thousand security officials have been deployed on duty with armed military personnel around the stadium and on the route of team busses to the stadium.

Hundreds of security cameras have also been installed to keep a close watch on the movement of spectators.

A “dispersal plan” has also been laid out, CTO Lahore Rai Ejaz said. Once the match is over, fans will leave Gaddafi Stadium through shuttle services.

“This is not just a cricket match, it is a matter of Pakistan's honour,” the DIG maintained.

He advised the residents of Lahore to avoid visiting Liberty Market unless they have “some important business or wish to watch the match”.

“We have tried our best to ensure that residents do not face problems regarding traffic this time,” Ejaz claimed.