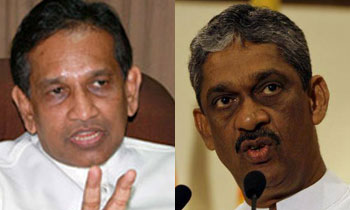 Cabinet Spokesman and Minister Rajitha Senaratne today said that Prime Minister Ranil Wickremesinghe had accepted the Ministry of Law and Order only for two weeks, and that Field Marshal Sarath Fonseka would be given the portfolio afterwards.

He revealed this during a meeting held at the Health Ministry this morning.

The Minister said someone who is clever and makes strict decisions should be appointed as the Law and Order Minister.

“Those who make double deals are not suitable for this post. Though higher-rankers in the Police Department are against the appointment of Mr. Fonseka, lower level officers are on board. Sarath Fonseka is a war-hero. Those who boasted about war heroes should accept that. The personnel, who robbed and killed, had also been venerated as war-heroes today. Ministerial portfolios are not forever. Those who are wavering should be removed from the Cabinet. The Cabinet cannot be finalized to satisfy the wants of Ministers. Appropriate decisions should be taken by the President and the Prime Minister and not by political parties,” he said.

Responding to former president Mahinda Rajapaksa who has said that the cabinet reshuffle was a comedy, Minister Senaratne said Mr. Rajapaksa used to reshuffle the Cabinet to teach a lesson to ministers.

“Even some ministers had expressed different opinions over the reshuffle. They may make such statements when they are not given what they expected,” he said. (Sujith Hewajulige)