You are here: Home / Breaking News / Seating to be rearranged if 16 SLFPers sit with opposition – Daily Mirror 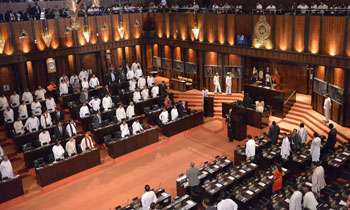 Parliament Secretary General Dammika Dassanayaka said yesterday the seating in Parliament would have to be rearranged if the 16 former SLFP ministers, state and deputy ministers opt to sit in the opposition on May 8 when the Parliament reconvenes after the prorogation.

He said this in the wake of media reports that they were likely to sit in the Opposition after officially informing Speaker Karu Jayasuriya.

“We haven’t been informed about their decision. If they give us ample time by doing so before May 8, we will have to re-arrange the seats to accommodate them in the Opposition,” Mr. Dassanayaka said.

He said President Maithripala Sirisena is expected to issue an extra ordinary gazette notification indicating the time of the opening of the second session of the 8th Parliament on May 8 soon after he returns from London.

Mr. Dassanayaka said the President would make a policy statement when Parliament is reconvened.

He said the gazetting of the time of the opening in the gazette that prorogued Parliament was not unusual as this had happened in the past as well.

Mr. Dassanayaka said the terms of the 16 Sectoral Oversight Committees like the Finance Committee and the High Posts Committee would not expire with the prorogation but nearly 50 various other committees like COPE and House Committees have to be reappointed. (Sandun A Jayasekera)