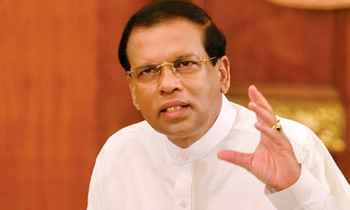 President Maithripala Sirisena is reported to have said the government should project a common stance on the SAITM issue instead of ministers making contradictory statements.

The Cabinet discussed this matter yesterday amid ministers expressing various views on it. Ministers like Rajitha Senaratne and S.B. Dissanayake are in favour of SAITM being operated as a non-state university while Ministers Patali Champika Ranawaka and Dayasiri Jayasekara asking that it be abolished.

However, against this background the President stressed the need for the government to take a common stance on this matter.

The government has proposed that SAITM be administered by a trustee and another proposal to reduce the fees charged from students. The President said all demands, other than the one for nationalising SAITM, had been met and pointed out that the final decision would be taken after the Supreme Court ruling on the matter. (Kelum Bandara)