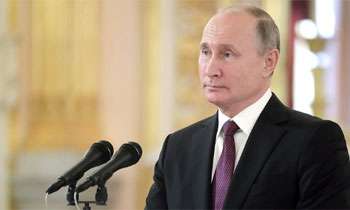 Russia, which maintains traditionally friendly relations with Sri Lanka, is interested in closer trade and economic cooperation, including in fishery, agriculture and tourism, President Vladimir Putin has said on Thursday.

He expressed these views at a ceremony held in the Alexander Hall of the Grand Kremlin Palace where 23 new ambassadors including Sri Lankan Ambassador Dayan Jayatilleka presented credentials to President Putin.

“I would like to note that in September, Russia and Sri Lanka signed a bilateral inter-governmental agreement on military cooperation,” the President said.

He said diplomacy is needed to play an active and constructive role, to use the power of words, negotiations and compromise to make a tangible contribution to overcoming the current difficulties in international affairs and searching for responses to new challenges and threats.

“Russia is dedicated to a peaceful policy and progressively carries out a responsible course in foreign policy. As a permanent member of the Security Council, Russia defends the basic principles stipulated in the UN Charter: sovereignty and equality of states and non-interference in their domestic affairs. We stand against using politically motivated protectionism measures and sidestepping the norms of international law. Russians want to live in peace; they want Russia to be a strong and independent state. We try to do everything necessary to strengthen global stability and to build a system of equal and indivisible security,” he said.