Congestion is something we take for granted these days. So much so that we cannot now imagine a world without it. Even a casual glance will show us that we live overcrowded lives. Drowning in a thick soup of human beings, vehicles, buildings, gadgets, ideas, thoughts, emotions – you name it, we are hammered on a daily basis by an excess of it. Cities overflowing with humanity and their attendant excess and waste.
Roads snarled to a standstill by motorists. Air, water and earth saturated with toxins. Social media-ideas sludge chocking our ability to even breath let alone think. Forced to absorb this, most of us are going crazy without knowing why because everyone else is also going crazy at the same time so there is no way to see it any different. No amount of money, power or fame can free us from this mental, physical and verbal crowdedness. If fact, those things have a tendency to infinitely compound an already impossible situation.

Dr. John B. Calhoun, the American ethologist and behavioural researcher and became famously known as the “behavioural sink”. He started his work in 1947 and published his findings in the Scientific American in 1962

Flashback to my early teens. Back then, telling horror stories to each other was one of the ways of gaining acceptance among friends. My favourite (for a very short time) was about over-crowded rat enclosures where everything was aplenty but space at a premium. For me, it was the scientific bogey story to beat all bogey stories.

Alas, my friends did not seem to think so. They did not remain my friends for much longer either. You see, there were no ghosts or zombies or aliens in my story and I was merely a morbid, pessimistic, storm crow. When asked where I had heard the story, I carelessly said I had read it somewhere but couldn’t remember. Their conclusion was obvious. I was a serious case of nut-job.

I was to be left well alone, or, if touching was required, then, carefully, clad in a virus resistant coverall, with a ten foot bargepole with a condom on it. And, in Sri Lanka, in days when the number of humans was not that big and there was no internet for instant affirmation, my claims that rats and humans were interchangeable in the social ordering of exploding populations was deemed the stuff of a very seriously deranged imagination.

This story (for it does read that way) was one of the most famous social experiments of all time. It was designed and conducted by Dr. John B. Calhoun, the American ethologist and behavioural researcher and became famously known as the “behavioural sink”. He started his work in 1947 and published his findings in the Scientific American in 1962. His paper became known as one of the 40 studies that changed psychology and went on to be quoted upward of a 150 times a year.

In his 1954 experiment at the Laboratory of Psychology of the National Institute of Mental Health, his rat universe was provided with as much food, bedding and shelter as the rats required. The enclosure held no predators and disease exposure was minimal. Calhoun described his experimental universe as “rat utopia,” or “mouse paradise.” With all their visible needs met, the animals bred rapidly. The only restriction Calhoun imposed on his population was of space – and as the population grew, this became increasingly problematic. As the pens heaved with animals, one of his assistants described rodent “utopia” as having become “hell” (Marsden 1972). Again, what happened?

Here is a very general summary of the various phases of his behavioural sink and it shows excesses resulting in a rat utopia lost or, in human terms, as Tennyson was wont to say, in paradise lost.

Human beings are in the same trap

Enough science I think? The parallels to modern human behavioural trends are quite obvious. While I have sufficient metaphysical evidence to be anthropocentric, in this case, I stand down on that stance. No one needs metaphysics or density studies to figure this one out.

The reason why each of us needs more space than our physical bodies inhabit is because of something zoologists call the flight distance (The minimal distance from another animal or human at which point it decides to flee). Beyond that point, any encroachment of space, or, minimal point of territorial integrity, moves the animal closer to fight distance at which point the animal decides that it cannot flee but can only fight.

Given the number of people in the world (7.2bn), habitable land mass (just 19% of total land mass), each of us has only about 4,104 sq. metres to live on. If we apply the rat-universe parallel of a maximum of 200 rats per 1000 sq. metre to human habitation,a small calculation will inform us that we have already two-fold exceeded our peak point population vis-à-vis overcrowding.

Two fold! When one takes into account that not all habitable land is actually occupied, we have a very large number of people living in many high density pockets (metros, cities, towns etc.) where the flight-distance is already invaded and in many cases, even the fight-distance has been compromised. 61 wars at present across the planet folks. Yes! there are 61! Most of them group driven, ethno-religious, genocidal, brutally extravagant in the type and form of murder and the direct and indirect body count. If you are looking for a good example of Human Calhoun rats in phase 3, look no further than the so-called war on terror in Iraq where 2 million people were murdered of which 50,000 were children. 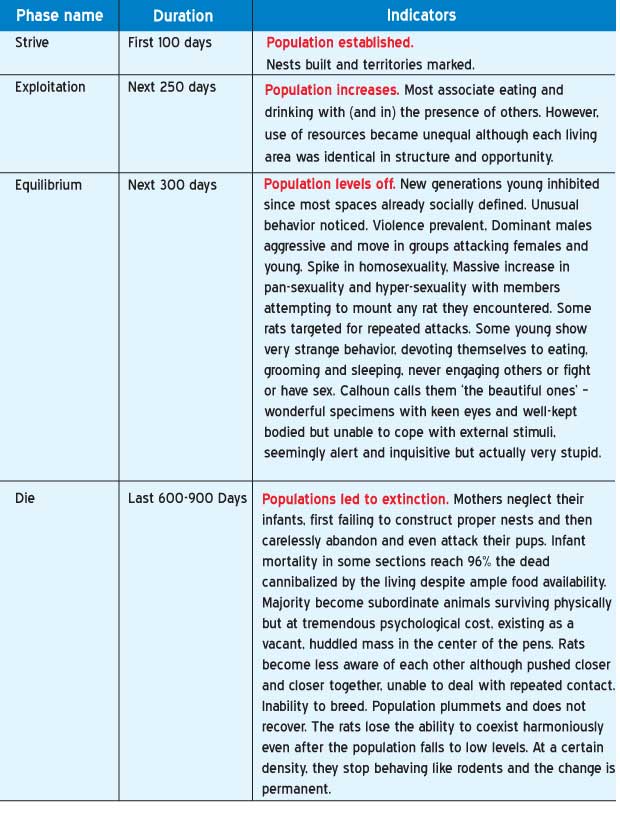 Our present situation shows us that the human race is past the striving and exploiting phase and are in the process of transiting swiftly past the equilibrium phase to the death phase. We have cast the die and the die reads “die”.

Well then, we must ask ourselves what on earth are we doing here, going round and round the earthly enclosure like rats in a trap, trying this democracy or that dictatorship, this rule or that law? Not a lot that bears mentioning.

Instead, what we have are psycho-pathological humans huddled over mobile devices, running away from social engagement, slamming themselves repeatedly into waves of information explosions comparable only to population explosions, running screaming away from that into vacant staring or equally vacant copulation, terrified of committing to anything, scared witless of breeding and feeding and caring, rationalizing every irrational behaviour, throwing kids at daycares, killing teachers, raping mothers, humping anything that moves, bouncing from twenty-minute uppers to twenty-day downers, poisoning bodies with every kind of drug imaginable, searching…searching…searching… uselessly for an escape from this overpopulated prison we call earth.