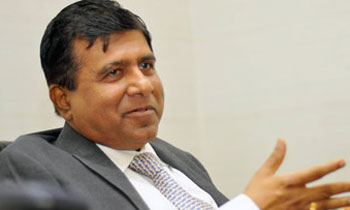 The government today said it is ready take up the aborted debate on the UNHRC resolution on another day.

This was mentioned by Justice Minister Wijeyadasa Rajapaksshe at a joint press conference he held with Chief Government Whip Gayantha Karunatilake at the Parliamentary complex last afternoon.

“We are ready to hold the debate on another day but the joint opposition has to resolve the issue on time allocations with the UPFA leadership,” Mr Rajapaksa said.

He said it was the former government which signed an MoU with the former UN Secretary General Ban Ki Moon which was followed by the appointment of Darusaman committee that accused that 40,000 civilians were killed during the final stages of the war. Mr Rajapakshe charged that the previous government later made a commitment to the UNHRC stating that it would take action on human rights violations and would go for devolution of power.

The Minister said UNHRC brought in a dangerous resolution against the government but the present government was able to dilute it to a great deal and scrap the call for an international probe on alleged human rights violations.(Yohan Perera and Ajith Siriwardana)