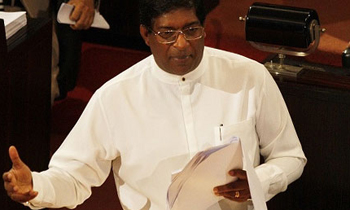 Raising this matter of privilege, he said he had nothing to do with the alleged death threats on the penthouse owner Anika Wijesuriya.

“A complaint was made by Ms. Wijesuriya's brother Victor Wijesuriya who had initially complained to the police while ASG Yasantha Kodagoda submitted a copy of that complaint to the Bond Commission on October 17.

Wide publicity was given to this incident in the media, but I have nothing to do with it,” the MP said.

He said Ms. Wijesuriya had actually gone on a visit to Bali and had returned to Sri Lanka, after which she had attended to some matters pertaining to her family property. She had then left for Britain.

The MP said he had handed over a letter to the Bond Commission's Secretary on this matter and faulted him for not submitting it to the commission.

“Even the judges in the Commission are confused with the activities of the Commission's officers. He therefore asked how the officers talk about a verdict even before it is given. The MP also blamed the Attorney General’s Department on their failure to conduct a proper investigation on this issue. (Yohan Perera and Ajith Siriwadana)