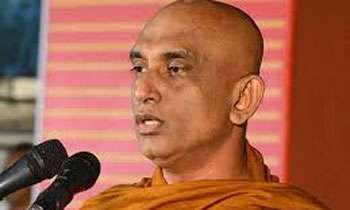 While condemning the government’s decision to lift the ban on the Glyphosate weedicide for the tea and rubber industries, Parliamentarian Ven. Athuraliye Rathana Thera today said this decision was illegal.

Rathana Thera told Daily Mirror that the related authorities had taken this decision without going through an accurate procedure and added that the decision had been made without the gathering of the committee to probe into this matter.

“Accordingly, the authorities cannot lift the ban on the Glyphosate for tea and rubber industries in such a manner. It is unlawful. We will take actions with this regard,” the Thera said.

However, Rathana Thera has taken initiative in banning the use of Glyphosate in Sri Lanka for the past several years.

Plantation Industries Minister Navin Dissanayake today told a news conference that it was decided to lift the ban on Glyphosate for tea and rubber industries and added that discussions were held with President Maithripala Sirisena and Prime Minister Ranil Wickremesinghe with this regard.

Minister Dissanayake said Cabinet approval would seek on lifting the Glyphosate ban on these specific industries during the next week.

However, Glyphosate ban on other cultivations including paddy will be continued. (Kalathma Jayawardhane)