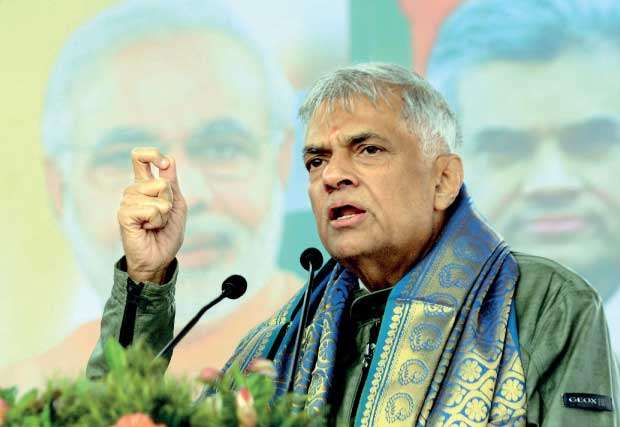 Prime Minister Ranil Wickremesinghe has struggled somewhat to carryout his business and economic ideas for the betterment of the nation during the Yahapalana Regime due to many decisions taken by President Maithripala Sirisena.

It is no secret that Wickremesinghe and Sirisena are engaged in a cold war with the latter having his way because of the powers vested upon him through the Executive Presidency. Premier Wickremesinghe has proposed ways of enhancing Government income through taxes, ideas to which the president has not been receptive. The last occasion when the President reversed a decision taken by a Wickremesinghe ally, Mangala Samawarweera, was when the Finance Minister increased fuel prices last July. We also remember Sirisena preferring to watch the no confidence motion against Wickremesinghe unfold quite passively and also the removal of the premier as the Minister for Law and Order, after just 11 days in this post.

But Wickremesinghe survived many a crisis and continues to show the political acumen of a seasoned politician. A few days ago the Chief Incumbent of the Mirisawetiya Temple Ven. Ethalawetuna Wewa Dhanatilake was quoted in the newspapers saying that many Buddhist monks had, during the time of the late Ven. Sobitha Thera, made a request to Wickremesinghe not to leave the country and continue with his political career.

It’s not only the clergy, even the minorities would wish to see Wickremesinghe in politics and also deal with him. He has been a politician who continues to include the minorities in his plans

It’s not only the clergy, even the minorities would wish to see Wickremesinghe in politics and also deal with him. He has been a politician who continues to include the minorities in his plans. A few days ago he was well received in Nuwara Eliya when he attended the opening ceremony of Mahatma Gandhi Puram, a housing project which is funded by the Indian Government. This phase of the Indian Government funded programme will see as many as 4000 houses being build in the Central Hills. This is apart from 46,000 houses to be built by the Government of India (GoI) for the benefit of people displaced by the war.

UNP loyalists are demanding that Wickremesinghe name the party’s candidate for the next presidential elections which are expected to be held in 2020. But his delaying this vital party decision only makes matters worse for the Green Party which is struggling to win the hearts of the Sinhala Buddhists in the island.

But Wickremesinghe knows well that despite calls by critics to show what this Government has done as real development, the cards he is playing in terms of talking about reducing the debt service and wanting to work along with China and India have served him well.

It seems that Wickremesinghe is working on obtaining the votes of the minority Tamils, whether it be for him or the UNP, at future elections.

A few days ago he was well received in Nuwara Eliya when he attended the opening ceremony of Mahatma Gandhi Puram, a housing project which is funded by the Indian Government

He has made it clear that the work of the Central Highway Project will begin soon with the help of India and China. He has said that the Chinese Government, Chinese companies, the Government of India and Sri Lankan companies will also have opportunities in getting involved in the construction of this transport facility. Wickremesinghe like Mahinda Rajapaksa knows well to keep ends warm with India and look to China as the emerging force in Asia. China, in the long-run, prefers to deal with a president of the likes of Mahinda Rajapaksa. But given their interest in having a say in the ports of other Asian countries, China will still continue to forge deals with the present Sri Lankan Government, despite the rift between the top two heads of this regime.

But with just about over an year for the next Presidential Elections, Wickremesinghe has placed his foot in the Tamil community to garner support, probably for himself. If it was for the party he would have by now named the UNP’s candidate for the 2020 President Elections. Given the manner in which Wickremesinghe is maneuvering in the political scene all pointers are that he wishes to be UNP’s candidate at the next big election. He has been Sri Lanka’s Premier twice before and if he is habouring dreams of becoming President one day they are logical after all.

Wickremesinghe also sees the same set-up in the main opposition, now formed by a new political group called the Sri Lanka Podujana Peramuna, which is spearheaded by former President Rajapaksa. A similar scenario can be seen in the Sri Lanka Freedom Party (SLFP) where President Sirisena is the Chairperson. Even at this juncture Sirisena has been non-committal about whether he would contest the 2020 Presidential Elections.

In this bleak political scenario in Sri Lanka there is one person who breathes some life into the fading hearts of the people. He is none other than former Defence Secretary Gotabaya Rajapaksa. Gotabaya has continued to self-promote himself through the Viyath Maga Programme. Political critics opine that Mahinda Rajapaksa is behind in his campaign to field a competent candidate for the 2020 Presidential Elections. Mahinda has been eternally postponing offering his support to Gotabaya despite there being a recent meeting where the duo were featured in talks with the Leader of the Opposition R. Sampanthan.

Wickremesinghe like Mahinda Rajapaksa knows well to keep ends warm with India and look to China as the emerging force in Asia. China, in the long-run, prefers to deal with a president of the likes of Mahinda Rajapaksa

We know Wickremesinghe being arrogant and a kind of a dictator within the UNP. He can now snap his fingers and recall how former President Rajapaksa once told voters to consider him at one of the presidential elections which is similar to saying, “The known devil is better than the unknown angel”.

UNPers are chanting the names of Sajith Premadasa and Navin Dissanayake as potential candidates from the Green Party at the next Presidential Elections. It’s not that Wickremesinghe doesn’t hear these cries. But he seems to be telling voters in no uncertain terms that they in instead should see in him a veteran politician whose best will be seen towards the end of his career.