You are here: Home / Breaking News / Putin stays put As the Empire strikes back – Daily Mirror 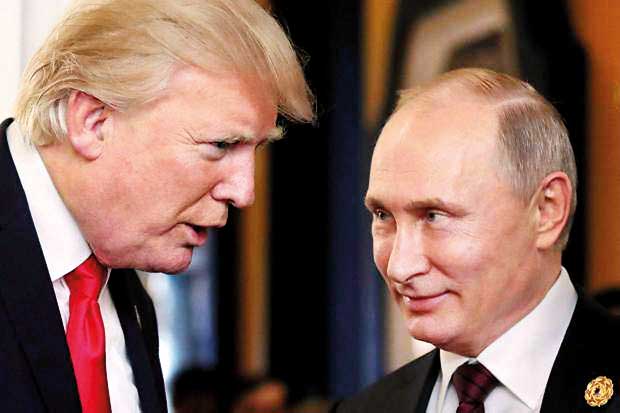 Trade wars, diplomatic expulsions, domestic political battles, North Korean leader Kim’s trip to China were few events that took global media attention last week.
They represent the chaos of global politics in the 21st Century and a harbinger to the prophecy of the beginning of the end of the World order that was built in the aftermath of the Second World War in 1945.Neo Cons and America’s Wars

How did the world get here and what is driving an increasingly leaderless, fractured global governance mechanism running on safe mode. Multitude of factors did contribute, yet this analysis focuses on two events. The infamous letter sent to President Bill Clinton exactly twenty years ago by the neo-conservative collective called New American Century urging full scale war on Iraq.
Secondly, Operation Iraqi freedom the codename of the US Invasion of Iraq 15 years ago.
Former Secretary General of NATO, Javier Solana writing few weeks back identified the Iraqi invasion as the moment that led to the beginning of end of America’s post-cold war hegemony in global affairs.
The letter written by a group of leading Neo Conservatives in the United States to President Clinton in 1998 called for American intervention in Iraq and the last paragraph of the letter needs to be revisited.
It follows as ‘We urge you to act decisively. If you act now to end the threat of weapons of mass destruction against the U.S. or its allies, you will be acting in the most fundamental national security interests of the country. If we accept a course of weakness and drift, we put our interests and our future at risk.’

“Russia provides a perfect cover for China in many aspects of global politics and strategic engagements.”

America first encountered the ferocity of Al Qaeda in its fateful mission of 1993 in Somalia, the infamous Blackhawk Down Mission.
Thus Clinton had no appetite to go to war against Iraq yet the events of September 11, 2001 and a conservative Republican President in the form of George W. Bush led the United States into the Iraqi invasion in 2003 that saw the wishes of the architects of letter coming true. The signatories included the lights of end of history scholar Francis Fukuyama, Robert Kagan, Paul Wolfowitz and the new Defence Secretary of Donald Trump, John Bolton who is feared globally as an unsympathetic god of war.
As the war unfolded into many years taking lives of hundreds of thousands of Iraqi civilians, giving life to extremist terrorism, an American economy sinking under its imperial overreach and the American political fabric destroyed by its internal contradictions saw signatories to the letter such as Fukuyama and Kagan publicly regret their decision.
Yet, the current global turmoil and especially a resurgent Russia is clearly an unintended consequence of the United States unending military forays in the last two decades and its inability to back it up with sufficient economic governance.

Thus Russia’s emergence and Putin’s rise, especially his election victory in March this year has made analysts argue the emergence of a new cold war.
This analogy seems to be too narrow, and in the context of 21st century, a framework that does not capture the complexities and realities of this century. The Cold war divided the world along two competing ideological and material frameworks; today’s world is divided across a more complex set of political and economic markers.
One major failure of the United States has been its inability to grasp and respond to these transformations at political and strategic levels in this century.
Russia has managed to do one thing right, it has managed to continuously trap United States and its NATO and non-NATO Asian allies by creating global and domestic challenges forcing these nations to respond uncritically.

“Putin’s rise in March marks the emergence of a new cold war.”

Russia has found serious structural and leadership vulnerabilities in the Western world especially in both its democratic political system and its liberal international governance mechanisms. While Russia may not be the most influential counterweight to the United States, China is the favorite, but Russia’s actions are making it somewhat easier for China to gain a foothold in global governance.
Russia provides a perfect cover for China in many aspects of global politics and strategic engagements. The US state department which is in charge of maintaining Americas foreign relations, sustaining its foreign policy objectives and goals today is under-going an internal depletion.

Trump’s choice for the secretary of State further exposes this crisis. The US president has opted to replace the former energy Czar to an individual who believes war remains number one option for projecting American Power, begs the question what would happen to American diplomacy in the future.
Last Sunday a former Russian Double Agent Sergei Skripal and his daughter Yulia Skripal, who are residing in England were exposed to an attack using a chemical nerve agent that is of Russian origin. The attack left both individuals in critical condition and unleashed an unprecedented expulsion of Russian diplomats in the United Kingdom. According to Prime Minister May, it was in direct response to alleged Russian operations within United Kingdom which she claimed was an ’unlawful use of force’.
Critics are arguing that British investigators have so far failed comprehensively to connect the forensic trail with Russian spy circles operating in the UK.

United States, along with 24 European countries and some of its Pacific allies triggered a mass expulsion of Russian diplomats in solidarity with the United Kingdom. This is the largest diplomatic expulsions in modern history. While Western scholars argue that Putin has made a grave miscalculation in underestimating the wrath of his Western adversaries. Some argue that the West has once again played into a master strategy executed by President Putin. Russia also has started expelling American diplomats with an April 5 deadline to leave the country.

Western countries have successfully used diplomacy to ensure the safeguarding of its interests and norms, promoting its values and strengthen liberal institutions. The expulsions are analogous to hitting the auto destruct button to undo all the good work diplomacy has achieved for the liberal world. The diplomatic recession limits alternatives to deal with global crises and pushing states to adopt military or near military option to respond to global adversaries.China’s New Wingman
Russia has engineered a perpetual militarization to Western foreign policy, American led Western allies backed the war against Iraq and consequently destabilized the prosperity of the liberal capitalist model. With the liberal model in disarray many liberal Western states, embraced nationalism, protectionism, encouraged populist movements.
The fallout from these internal contradictions in the Western world has made China its greatest benefactor.

“How did the world get here and what is driving an increasingly leaderless, fractured global governance mechanism running on safe mode. “

China is leading an effort to introduce alternative model of global integration with its belt and road initiative, call for global stability and even managed to get the erratic North Korean leader to visit Beijing last week and use diplomacy to contain him.
Russia has become the best wingman China could ever have, it has managed to consistently out maneuver the Strategists in the West. The information sphere is a classic example, America scholars and analysts concede that Russia has already won the first infowar and that they should be prepared if possible to win the next one. Both in the information and electronic sphere Information and Electronic Warfare spectrum seems to be giving Russians a slight edge and Russia is building and modernizing its nuclear strike capabilities as well as its nuclear counter measures.
The West’s new confrontations with Russia cannot be explained as a new Cold War, this exactly is the problem the West has, and it has consistently tried to understand Russia from a 20th Century geopolitical mentality, while Russia has managed to engage the world understanding the realism of the 21st Century. It does not want to lead the World, but it aspires to be the catalyst in enabling the world to be reshaped.
These new strategic moves and counter moves should be followed carefully by Sri Lanka. Russia may not be near to us, but we should not underestimate or under value Russia’s role in global politics.

The Writer is Director, Bandaranaike Centre for International Studies (BCIS)