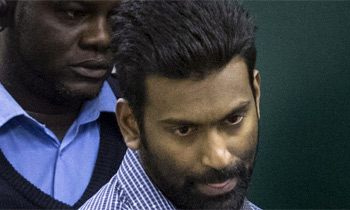 Sivaloganathan Thanabalasingham, the man accused of killing his wife and whose trial was stayed by the Superior Court, is slated to be deported to Sri Lanka on previous charges, but Quebec Crown prosecutors are requesting the Canadian government block the deportation, according to reports.

Thanabalasingham, who initially contested the deportation order handed to him in April because of a domestic violence conviction, could leave as early as next week.

His murder trial was stayed in March by Superior Court Justice Alexandre Boucher in what is considered to be the first time a murder charge in Quebec was stayed because of the Supreme Court of Canada’s Jordan ruling last July. Boucher determined the case took too long to get to trial after Thanabalasingham waited five years. The Jordan ruling states that a trial for serious offences cannot be postponed for more than 30 months after the arrest.

However, Quebec’s director of penal and criminal prosecutions appealed this decision in April and has sent a request to Canada’s minister of immigration, refugees and citizenship, Ahmed Hussen, to postpone the deportation until a decision is made on the appeal.

If Thanabalasingham is deported, it remains uncertain whether he could come back to Canada for the trial, since Canada does not have an extradition agreement with Sri Lanka.(National Post)