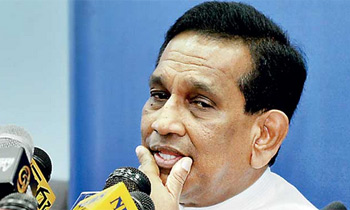 Some 43 files on which investigations had been completed by the FCID, the Bribery Commission and the CID on various crimes have been forwarded to the AG’s Department some two years ago and they are gathering dust.,Cabinet spokesman and Minister Rajitha Senaratne said today.

Dr. Senaratne expressed his disappointment and disapproval on what he called a ‘go slow’ policy by the Attorney General’s Department on cases against politicians and top officials of the Mahinda Rajapaksa regime and a quick and no hold barred attitude to file involving charges against Yahapalana politicians.

Minister Senaratne told the weekly cabinet news briefing held in Parliament today that the entire country and the government expected the AG’s department to show the same efficiency, haste and speed to file charges against ministers and officials who robbed the country and committed various crimes including murders and embezzlement of billions of rupees of public money and added sadly this was not happening.

“I think a probe on the performance of the AG’s Department is also a necessity. I am aware that the some 83 files on which investigations have been completed on various crimes by the FCID, the Bribery Commission and the CID have been forwarded to the AG’d Department some two years ago and gathering dust. No charges have been filed against any of these crimes. Don’t forget that this is the department that took months if not years to identify the signature of former Defence Secretary Gotabaya Rajapaksa,” Minister Senaratne said sarcastically.

Minister Senaratne accused that a lady state counsel even allegedly instructed to expedite the inquiry against Mr. Senaratne.

Minister Senaratne also expressed reservations on the ongoing probes by the Presidential Commission of Inquiry (PCoI) on the bond scam and said it was appointed by President Maithripala Sirisena for a specific investigation but now it has ventured into probing non relevant or unnecessary matters such as leasing out of apartments to Ministers that has made the main issue complex and confused.

“Have you ever heard cabinet Ministers are brought before commissions of inquiry and questioned by state counsel before in the same way how Minister Karunanayaka was cross examined by the Additional Solicitor General very aggressively before the PCoI? Under the Rajapaksa regime a state counsel was not permitted even to open a file against a government minister of official. This is the difference the Yahapalana government has introduced,” he added.

Minister Senaratne said the PCoI has made a request to extend its term of inquiry by another 3 months and questioned as to whether it was to probe the bond issue or any other matters and added the task of the PCoI was not to provide sensational news to the media.(Sandun A Jayasekera)