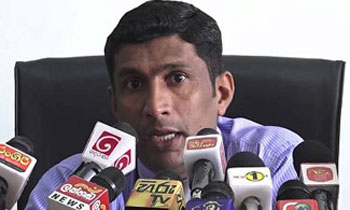 The Government Medical Officers’ Association (GMOA) said today it would complain to the Financial Crimes Investigation Division (FCID) on the use of state funds by Higher Education Minister Lakshman Kiriella and Health Minister Rajitha Senaratne to publish advertisements on SAITM.

GMOA Secretary Navin de Zoysa said the two ministers were publishing advertisements favourable to SAITM which was a private institution.

He said it was unethical for the ministers to protect a fraudulent private institution by spending state funds.

Dr. de Zoysa said it was a matter of surprise to find the government misusing public resources when such action by the previous government was under investigation.

“We feel that the government has aggravated the SAITM issue through pro-SAITM proposals mentioned in the advertisements,” he said.

He said the GMOA hoped that the President would pay attention to the misuse of state funds. (Ajith Siriwardana)