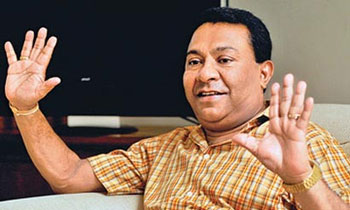 President Maithripala Sirisena had to intervene when Prime Minister Ranil Wickremesinghe became annoyed with a leading businessman at the National Economic Council (NEC) meeting held on Tuesday at the Presidential Secretariat and reconvened it after the suspension of the meeting for a few minutes, SLFP dissident group front liner S.B.Dissanayaka said today.

He said Mr. Wickremesinghe had not been happy about the views expressed by DSI Group chairman Dr. Samson Rajapaksa when he said he was now importing leather products, mainly shoes from China.

“Prime Minister Wickremesinghe has reportedly said that the government did not want advice on economics from Rajapaksas and blamed Dr. Rajapaksa which compelled President Sirisena to postpone the meeting for a few minutes,” Mr. Dissanayaka said.

“There is no doubt that the collapse of the national economy, uncontrolled depreciation of the rupee, continuous increase of fuel prices and related price hike of all essential commodities are the direct results of these policies,” he said.

“The unrestricted permission given to import anything and everything including non essential goods like kites, green gram, soy beans and various other food varieties and toys have drained billions of dollars out of the country. Almost all these imports can be easily produced in Sri Lanka. Result is the sharp depreciation of rupee and mounds of debts,” Mr. Dissanayaka noted.

He pointed out that Mr. Wickremesinghe and his government did not have a strategy to restore the confidence among investors and develop tea and rubber industry, tourism and garment industry. (Sandun A Jayasekera)