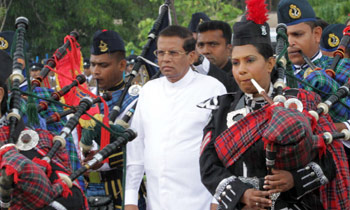 The motherland was saved from separatist terrorism by non other than our own war heroes as even foreign armies failed to do that in the 30-year civil war in Sri Lanka, President Maithripala Sirisena said yesterday.

Addressing the nation at the National War Heroes Memorial Ceremony 2017 at the Parliament Grounds last afternoon, President Sirisena went onto say that Sri Lanka was unprepared for a separatist terrorism when trouble started in the mid 70s.

“There was smooth running of the country sans any significant economic or national security hiccups until 1970 after gaining independence in 1948. Though there were occasional failures and setbacks, our armed forces, the Police and Civil Defence Force fought the separatist war bravely and with utmost dedication and resolve until the final victory. Even about 100,000 Indian soldiers of the Indian Peace Keeping Force were not able to contain the LTTE terrorists. However, the sons and daughters of the three armed forces and the Police of the motherland were able to annihilate the separatist terrorism from its soil for ever by using their experience in the war, strategies and knowledge combined with technological acumen,” President Sirisena said.

They faced many a hardship, threats and difficulties in their fight against terrorism. Hundreds of thousands of heroic soldiers made the supreme sacrifice in the war front on behalf of the motherland. Many others lost their limbs in the war and today they live as disabled soldiers in their own homes of welfare centers maintained by the armed forces. The number of civilians and armed forces personnel and members of the Police and Civil Defence Force who became victims of terrorist exceeds 100,000. There were soldiers who were killed by the terrorists directly and innocent civilians who perished to bomb attacks in towns and villages in remote areas that were the targets of the LTTE.

President Sirisena said incumbent government under him as well as the previous government for the last 8 years had done much for the welfare of the soldiers and Police personnel as well as families of fallen war heroes and disabled soldiers by way of providing houses, increasing their salaries and pensions, payments and compensations. The government is also determined to provide a house for each and every soldier.

Commenting on the performance of the armed forces in peace time, President Sirisena said the armed forces personnel have contributed immensely for disaster relief efforts and also to combat narcotics.

The service rendered by the armed forces during natural disasters took place in the Salawa inferno, the collapse of the Meetotamulla garbage dump and Aranayaka earth slip is extremely commendable. They have also helped in a big way to detect large stocks of drugs. In addition, armed forces personnel are involved in national development in many ways, he said.

We cannot find credible information on the defeats and victories in the prehistoric era of Sri Lanka and how we fought foreign domination and invasions before the arrival of Portuguese in 5005. But we have a written history on how we faced foreign invasions from 5005 to 1948. We have very colourful and vivid accounts of the struggles carried out by our courageous and proud forefathers against foreign invaders.

However, the most cruel, most barbaric and most heinous and most damaging act against the nation was separatist terrorism waged by the LTTE. That is why we are paying our gratitude, honour and appreciation to fallen war heroes who made their supreme sacrifice to save the nation and country from terrorism. The country and nation are indebted to them for ever for this, President Sirisena stressed.

While paying his personal honour and tribute to fallen war heroes, President Sirisena also paid his gratitude and appreciation to their parents and added the nation was indebted to them for ever.

Chairperson of the National Ranaviru Seva Authority, Anoma Fonseka made the welcome address. (Sandun A Jayasekera)