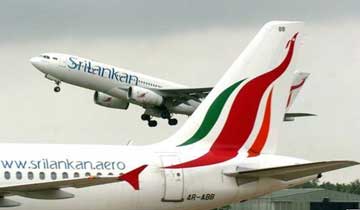 President Maithripala Sirisena has instructed the apex economic management body, the National Economic Commission (NEC) to renegotiate a dialogue with two international airlines in a bid to resuscitate the national carrier Sri Lankan Airlines (SLA) including the old partner Emirates and the latest rounds of talks have been satisfactory, a reliable senior government source said.

‘The issue of the future of the national carrier SLA was taken up by President Sirisena at the last NEC meeting held before his official visit to Qatar. It was pointed out by Public Enterprise Development Minister Kabir Hashim, who is also a member of the NEC that negotiations would begin very soon to set up a joint venture or outright sale of the SLA which has an outstanding debt of US4 600 million (more than Rs. 90 billion),” the source said on condition of anonymity. This large debt portfolio is holding back investors who are unwilling to partner with the SLA but reluctant to take up the liability,” he added.

Earlier, the cabinet appointed negotiating committee comprising Special Assignments Minister Dr. Sarath Amunugama, Minister Hashim and Development Strategies and International Trade Minister Malik Samarawickrama had a several rounds of detailed discussions with Emirates. The airline has raised its disappointment on the unilateral abrogation of the management agreement agreement with the SLA by the Mahinda Rajapaksa regime without considering the impact on Sri Lanka’s economy, tourism and the fate of the SLA. The sudden and imprudent decision had been taken reportedly on the instructions of UPFA national list MP and former President Rajapaksa’s right hand man and consultant Sajin Vaas Gunawardana, he noted

“A large question mark is hanging over the deals negotiated to purchase 6 brand new Airbuses as the price quoted has been much higher than the prevailing market price and the FCID is investigating the deal right now, he said.

“Tim Clark, the CEO of Emirates has stated during the first round of negotiations that the Emirates was willing to be partnered with the SLA once again but not ready for an equity partnership. However, the current negotiating team of the government is confident that further discussion would be continued until an agreement in a win-win situation is reached to both, he added.

Meanwhile, a Japanese airline has also expressed interests for a partnership agreement sponsored by a leading Sri Lankan businessman with interests in tourism, banking, insurance and milk products, he said.

The dispute arose when the Emirates refused to bump 35 passengers from a full London-Colombo flight to make way for former President Rajapaksa and his entourage in December 2007. (Sandun A Jayasekera)