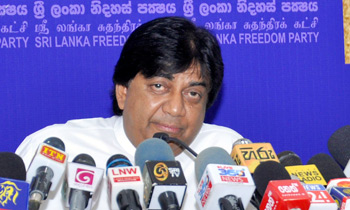 President Maithripala Sirsena has turned down a request made by certain foreign countries to declare an ‘Emergency Situation’ in Sri Lanka to offer further assistance, since it will affect the country’s reputation, Highways State Minister Dilan Perera said.

Addressing the weekly SLFP weekly news briefing at the party office Minister Perera said if an emergency situation was declared, the joint opposition will use it for their political advantage and therefore such action was not necessary as correctly decided by President Sirisena.

“Some 19 countries have already come forward to assist Sri Lanka in the disaster. They have asked us the areas we need help. The government agencies will dispatch all relief material and food donated by foreign countries to the affected areas. The money given by foreign countries will be used to construct houses that had been fully destroyed,” Minister Perera said.

Minister Perera said at today’s government group meeting held headed by President Sirisena it was decided to set up a ‘Contingency Plan’ to face an unexpected natural disaster.

The Contingency Plan includes to keep a fleet of boats, airplanes, choppers, dry rations, clothes, drugs and a trained armed forces personnel in readiness to deploy in disaster affected areas.

The correct leadership of President Suirisena and policies of the good governance have led a large number of countries volunteering to help Sri Lanka at this hour of distress which was not forthcoming in the recent past.

Minister Perera said certain natural disaster affected areas during the previous regime were still to be rehabilitated, with no facility to build houses for victims and construct roads and infrastructure as there were no foreign countries to help Sri Lanka.

What happened at that time was if Russia helped us, the US would turn back to Sri Lanka. If India helped, China and Pakistan would be offended. But today Sri Lanka is a friend of all countries rich and powerful and therefore no issue of helping us has arisen by any one due to our foreign policy, Minister Perera added.(Sandun A Jayasekera)