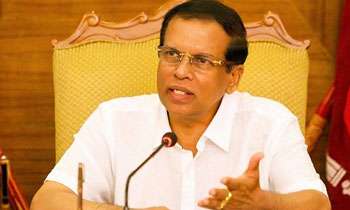 President Maithripala Sirisena is reported to have requested the 16 Sri Lanka Freedom Party (SLFP) members, who quit the government, to remain united amid reports about a split among the them.

Eleven of the 16, excluding MPs Susil Premajayantha, John Seneviratne, Anura Priyadarshana Yapa and John Seneviratne had met the President on Wednesday and discussed the current political situation in the country.

Some among them are said to be considering joining former president Mahinda Rajapaksa, while the others insist on remaining with the SLFP.

Political sources said they had informed the President that they were keen to secure their political future, and therefore the entire party should quit the government and highlighted the fact that the SLFP was riddled with confusion.

The President asked them to remain united and participate in the re-organising of the party. These SLFPers are reported to have taken a swipe at Ministers Duminda Dissanayake and Mahinda Amaraweera for contradicting a statement made by SLFP General Secretary Rohana Lakshman Piyadasa. (Kelum Bandara)