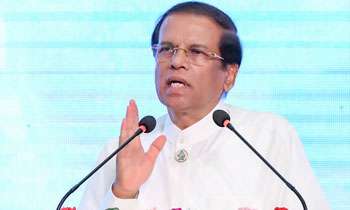 President Maithripala Sirisena called upon the leaders of the states in the Bay of Bengal Region to take collective steps against drug menace narcotics smugglers use ocean routes for drug smuggling.

Addressing the 4th Summit of the Bay of Bengal Initiative for Multi-Sectoral Technical and Economic Cooperation (BIMSTEC) in Nepal, he drew the attention of the leaders to the drug menace which is a great obstacle for the progress of the world community.

“It is the menace of drugs and narcotics, heroin, hashish, marijuana and other drugs that are smuggled into the country mainly by sea. This has largely affected our youth and the school children. Illicit drugs have become the most serious challenge and we require more advanced technology and training for our coast guard to fight drug smuggling at sea,” he said.

“I urge the BIMSTEC Association, the world community, and all the states to commit themselves to fight illegal drugs trafficking collectively and individually through a robust international programme that is more organized and stronger than now,” President Sirisena said.

The President said that some powerful corporate groups sometimes even succeed in toppling governments and the leaders should be vigilant about them.

The BIMSTEC regional bloc is one of the fastest growing regions in the world, said President Sirisena and added that Sri Lanka, as an Island Nation wishes to make maximum use of the ocean with new light on ocean research, tourism, fisheries and marine resources.