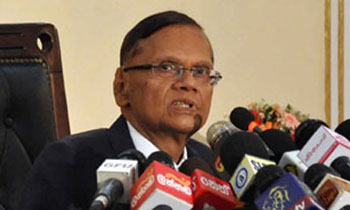 The government has made contradictory statements regarding the appointment of High Court Judge Ramanathan Kannan making one wonder whether it was a political appointment, former MP G L Peiris said today.

He said he had previously practised as a lawyer in the Baticaloa courts.

“Justice Minister Wejeyadasa Rajapakshe had said recently that political party was keen on appointing the particular person to the position,” Mr. Peiris said.

He said the Judicial Services Association (JSA) had met the Chief Justice who had reportedly said Mr. Kannan was nominated by President Maithripala Sirisena.

“The Chief Justice had revealed that the president appointed Mr. Kannan as a HC judge on a request made by the Sri Lanka Bar Association but it later claimed that it had not made such a request. It is a mystery how the appointment was made,” he said. (Thilanka Kanakarathna)