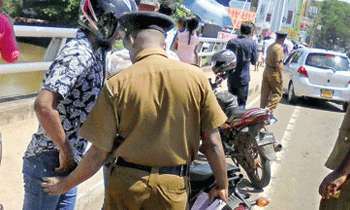 He said the special raid was carried out on the instructions of IGP Pujith Jayasundara and 16,422 Police personnel were engaged in the operation.

Accordingly, 541 persons were arrested for drunk driving while 812 were arrested in relation to possession of heroin or other illegal narcotics.

During the raid, the Police had arrested two suspects who were in possession of fire arms without a valid license.

Police had also arrested 948 warranted suspects and 84 suspects in connection with other criminal offences during the raid.

The Police were able to arrest 938 suspects who have been wanted for various crimes.

Over 5,808 suspects have been charged for road traffic violations during the operation that concluded yesterday.

Police Media Spokesman said more operations of this nature would be carried out in future too in view of reducing traffic accidents and criminal activities. (Sheain Fernandopulle)