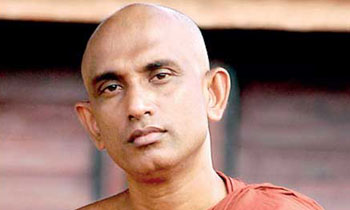 The people did not mandate to this government for Constitutional reforms that would necessitate a referendum, National Council of Sri Lanka Chairman Ven. Athuraliye Rathana Thera said today.

The Thera told a media briefing that President Maithripala Sirisena’s Presidential election manifesto stated that he would never permit to a Constitutional reform resulted from a referendum.

Ven. Rathana Thera said around 6.2 million people who believed in President Sirisena’s manifesto voted him to office to uphold the country’s sovereignty and unitary state. Therefore he cannot implement anything against what he promised to establish, the Thera said.

He also said TNA MP M. A. Sumanthiran who made a statement in Parliament that the government should go for a referendum earlier agreed the President Sirisena’s manifesto had not promised to do so.

TheThera said most countries that opted to Constitutional reforms ended up in tragedy so President Sirisena should not permit such a move and drag the country and its people to a calamity.

He warned the government that the country could not steer according to cheap political agendas and President Sirisena who was appointed by the people’s mandate cannot act against the people’s will.

He also said the Executive Presidency should not be abolished as it is the only hope in a situation of an unstable Parliament.

Meanwhile, Rathana Thera appreciated the statement made by the Tri party Mahanayaka Theras and said government should not criticize it as it was their sacred duty over the past to come forward and protect the country and its people when it is in danger. (Thilanka Kanakarathna)