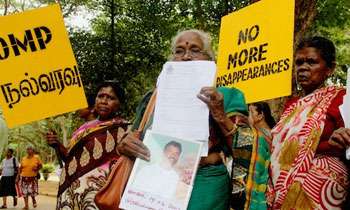 The first outreach meeting of the Office on Missing Persons (OMP) was held in Mannar on Saturday and many people had engaged in the meeting despite scepticism, OMP Chairman Saliya Pieris PC said today.

“All seven Commissioners of the OMP attended the meeting. The idea of the meeting was to share our plans with the family members of the disappeared and also to listen to their stories and ideas. Many of the families are sceptical whether the OMP can give them the answers and many of them probably expect quick results. unfortunately, the process of tracing the disappeared is a complicated process. However, it is encouraging to note that people participated in the meeting although many were sceptical. We told the people our plans. We are forming our 12 regional offices, eight in the North and East and four in the rest of the country,” he told the Daily Mirror.

He said the families expressed concerns that they had gone after so many commissions and institutions. “There were a lot of scepticism but we invited and told them that, despite their scepticism, to engage with the OMP and think of the OMP as one avenue that can be used to trace the missing and the disappeared,” he said.

Elaborating more about the meeting, he said it was based more on sharing of ideas as an outreach meeting than an investigation.

“This is the first of many OMP meeting to be held to reach out to the family members of the disappeared. What was noteworthy at the meeting was that there were so many stories to be shared, their versions of the stories and how their loved ones disappeared. What was admirable is the tenacity which they have pursued. One lady’s son has disappeared in 1989. We saw the courage and tenacity of the people who came there,” he said.

Mr. Pieris said the fact that the people were willing to participate despite their doubts were positive. “We clarified their concerns and asked them to report to us if they feel threatened by participating in the meetings, as some people raised concerns to that effect,” he said. The next OMP outreach meeting would be held in Matara on Saturday (19). (Lahiru Pothmulla)