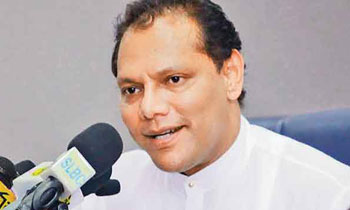 Minister of Sports Dayasiri Jaysekera is to seek Cabinet approval for a pension scheme for all sportsmen and sportswomen who had brought fame to Sri Lanka.

The Minister came out with this plan of his in response to a question raised by the MPs in Parliament on the issue with regard to Olympic Medal winner Susanthika Jayasinghe who is in the centre of a controversy currently over a plan to auction her silver medal.

“We have to think of other Sri Lankan sportsmen and sportswomen who had kept the country’s flag flying in the past as well other than Ms. Jayasinghe. Therefore, I have decided to submit a paper to the Cabinet seeking its approval for a pension scheme for all sportsmen and sportswomen who have brought fame to the country,” the Minister said yesterday.

“There are other athletes such as Sriyani Kulawansa, Damayanthi Darsha and Sugath Tilakaratne who have won medals even at the Commonwealth Games. We cannot cater to Susanthika alone when there are others who have done their job for the country,” he added.

The Minister said the Ministry of Sports paid a sum of Rs 60,000 to Ms. Jayasinghe while the Army also paid an equal amount. However, he said the payment was suspended as she failed to provide an activity report as an adviser to the Ministry.

“The auditors questioned the Ministry over the payments made to her without a report to back the services she provided,” the Minister added. (Yohan Perera and Ajith Siriwarana)