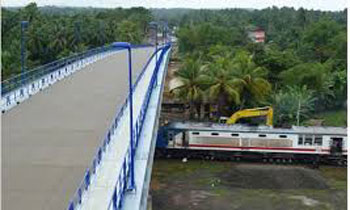 A pedestrian was injured when police in a car chase fired at a suspected luxury vehicle at the entrance to the overhead bridge in Gampaha at about 6.00 pm today, Veyangoda Police said.

The vehicle escaped the shooting but two persons travelling in it were taken into custody when it met an accident later.

The injured man has been admitted to the Wathupitiwala hospital.

The police had been chasing after the luxury vehicle for some distance in which a suspect had been travelling according to the police.

The suspect and a woman were arrested by the police with the support of the resident of the area when they attempted to flee after leaving the vehicle when it collided with a motorcycle at the Naranwattha area along the Veyangoda – Banduragoda road.

The police officials attached the the Kalmunai Police had chased after the vehicle and opened fire, Veyangoda Police said.

Under the instructions of the Gampaha Division Senior DIG Muditha Pussella, the Veyangoda Police are conducting further investigations. (Tony Karunanayaka)