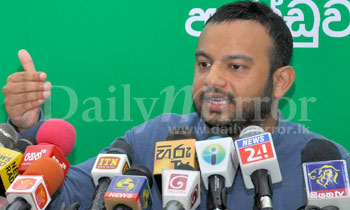 The United National Party (UNP) said yesterday it would carry out rigorous party reforms no sooner it defeated the no-confidence motion against UNP Leader and Prime Minister Ranil Wickremesinghe in Parliament.

MP Kavinda Jayawardena told a news conference held at Sirikotha that they were confident of defeating the no-confidence motion on April 4 and launch its reforms on April 5.

“At the Working Committee meeting held on Thursday, the party decided to support the Premier and defeat the no-confidence motion. We also decided to reform the party. Three committees each headed by Ministers Sajith Premadasa, Ruwan Wijewardene and Deputy Minister J. C. Alawathuwala were appointed to submit proposals for party reforms. Two of the committees had handed over their reports to the party leader,” he said.

When asked whether there will be a change in the UNP leadership when the party undergoes reforms, Mr. Jayawardena said the specifics would be decided by the party at its convention.

Meanwhile, he said government members including the Sri Lanka Freedom Party (SLFP) ministers should resign from the government if they supported the motion which would be defeated.

The MP rejected reports of the UNP bribing MPs to vote against the no-confidence motion. (Lahiru Pothmulla)