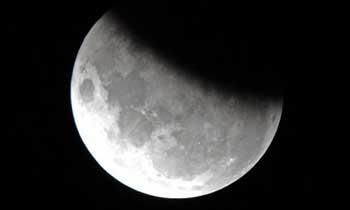 A partial lunar eclipse would take place on the night of August 7, Full Moon Poya Day, Director of the Astronomy and Space Science Unit of the Colombo University, Professor Chandana Jayaratne said yesterday.

Issuing a statement, he said the eclipse would be visible to Sri Lanka as well as several other countries in Asia, Australia, Africa, Europe, Eastern parts of South America, Pacific, Atlantic and Antarctica.

“The eclipse begins at 9.20 p.m. on 7th night with the moon entering into the penumbra of the earth’s shadow (less dark shadow) and ends up at 2.21 a.m. on 8th. The visible part of the eclipse begins at 10.53 p.m. with the moon entering into the Umbra(the dark part of the earth’s shadow) till the moon leaves the Umbra at 12.48 a.m on August 8,” he said, adding that around 25% of the moon surface would be covered by the dark shadow of the Earth around the greatest eclipse due at 11.51 p.m.