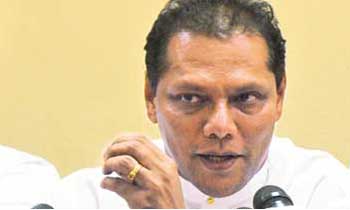 The sabotaging acts staged by the members of the Joint Opposition in Parliament last Friday (28) with the intention to preventing the passing of the Hambantota Port Development Project (HPDP) Agreement, had been instigated by a diplomatic mission of a powerful country, Sports Minister Dayasiri Jayasekera said today.

Addressing the weekly Cabinet news briefing yesterday, Minister Jayasekera said the opposition members had no intention to disrupt the Parliamentary proceedings, when the agreement scheduled to be signed between the Sri Lanka Ports Authority (SLPA) and the China Merchant Ports Holding Co. (CMPH) was taken up for debate on Friday.

“There was a call from a diplomatic mission in Colombo to the JO during the proceedings. Only after this call, the JO decided to disrupt the proceedings and members of the JO rushed to the well of the House shouting and blocking Government members addressing the House,” Minister Jayasekera said.

Journalists started fielding questions at this stage and Minister Jayasekera, who is also a joint Cabinet Spokesman, replied.

Journalist: The Cabinet has decided to introduce further amendments to the framework agreement of the HPDA Port. Why?

Minister Jayasekera: That is the difference between this Government and others. President Maithripala Sirisena does not want to do without the knowledge of the people. It was President Sirisena who said the agreement was open for further amendments and then to present it in Parliament.

Journalist: Why a week has been given to Ministers review the agreement?

Minister Jayasekera: President Sirisena thinks there is still space for the new ideas and suggestions. The Cabinet Ministers have been given a week to study the agreement. Only then it will be presented in Parliament for approval.

Journalist: Is the government ready to accommodate amendments proposed during the Parliamentary debate?
Minister Jayasekera: Yes, indeed. If there were any worthwhile and valuable suggestions, that are beneficial to the country, why not?

Journalist; Will the Chinese agree to new amendments?

Minister Jayasekera: All changes and amendments will be brought on mutual consent.

Journalist: Does that mean the agreement will have to be signed once again?

Minister Jayasekera: I don’t think so.

Journalist; Then why all these redoing and revisiting of the agreement?

Minister Jayasekera: The objective of further review is to ensure extreme transparency. No Government has ever presented an agreement of this nature to Parliament and all have been done in a hush-hush manner. That is why the Government has given another opportunity to the Joint Opposition to review the agreement and propose suggestions if they have any. The Government will incorporate if any valuable proposal comes from the JO. We have nothing to hide because this agreement is extremely beneficial to Sri Lanka. I believe the JO members will use this opportunity to air their views in a democratic and gentlemanly manner.

Journalist: What action the Government would take on the disruption in Parliament last Friday?

Minister Jayasekera: Party leaders will decide on that issue before the next session of Parliament. (Sandun A Jayasekera)