You are here: Home / Breaking News / Over 100 Killed in blast at election rally in Pakistan – Daily Mirror 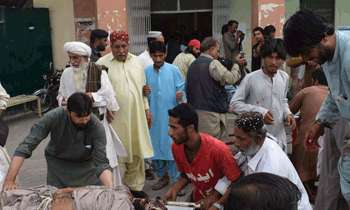 The death toll in a suicide bombing in southwestern Pakistan Friday jumped to 128, an official said, the deadliest in a string of attacks on political rallies that have raised security fears ahead of nationwide polls.
“Seventy bodies are in six different hospitals and there are more than 120 wounded. Between 15 and 20 are in critical condition,” Balochistan health minister Faiz Kakar told AFP.

The blast in the town of Mastung, near the Balochistan provincial capital Quetta, came hours after another bomb killed at least four people at a campaign rally in Bannu in the country’s northwest.

The ISIS group claimed responsibility for the suicide bombing at the political rally, according to the group’s Amaq propaganda agency.