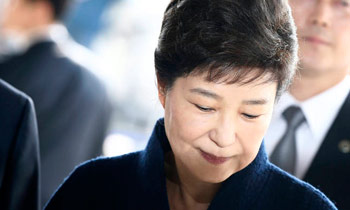 A South Korean court on Friday approved a warrant to arrest ousted president Park Geun-hye, the country’s first democratically elected leader to be thrown out of office, on accusations of bribery and abuse of power.

Park can be held in a cell for up to 20 days while she is investigated over allegations that she colluded with a friend, Choi Soon-sil, to pressure big businesses to contribute to now-defunct foundations set up to back her policy initiatives.

A judge at the Seoul Central District Court said in a statement that “the cause and the need for the warrant are recognized as the main charges against her have been verified and as evidence could be destroyed.”

About two hours after the ruling, Park was driven to the Seoul Detention Center located just outside of the city in a black sedan, with two female investigators escorting her, televised news showed.

Her supporters shouted her name and waved South Korean flags as she arrived at the detention center just before 5 a.m. local time, behind a cordon formed by the police to prevent the crowd from following her in and mixing with any Park opponents, who were also at the scene.

Park gave about eight hours of testimony at the same court on Thursday and was held at the prosecutors’ office next door while the judge studied the evidence and arguments to decide on whether to issue the arrest warrant.

On Thursday, Park, 65, arrived expressionless at the court to plead her case that she should not be arrested or held while prosecutors investigate the scandal.

Park argues that she does not pose a flight risk and will not try to tamper with evidence.

She and Choi have both denied any wrongdoing.

Park’s removal from office capped months of paralysis and turmoil over the corruption scandal that also landed the head of the Samsung conglomerate in detention and on trial.

Her impeachment this month has left a political vacuum, with only an interim president pending a May 9 election, at a time of rising tensions with North Korea over its weapons program and with China, which is angry over South Korea’s decision to host a U.S. anti-missile system.

Prosecutors said on Monday that Park was accused of soliciting companies for money and infringing upon the freedom of corporate management by using her power as the president. Park was questioned for 14 hours by prosecutors last week.

She could face more than 10 years in jail if convicted of receiving bribes from bosses of big conglomerates, including Samsung Group chief Jay Y. Lee, in return for favors.

Lee, who denies charges that he provided bribes in return for favors for Samsung, and Choi are both in detention and on trial separately.

Lee’s trial, for which so far only preliminary hearings have been held, will begin on April 7 when he is expected to appear, court records showed.

Park may be given a bigger cell than other inmates in a Seoul detention facility, but she would be subject to the same rules on everything from meals to room inspections, former prosecution and correctional officials have said.

She was removed from office when a constitutional court upheld her impeachment by parliament. The ruling sparked protests by hundreds of her supporters, two of whom were killed in clashes with police outside the court, and a festive rally by those who had demanded she be removed from office.(Reuters)