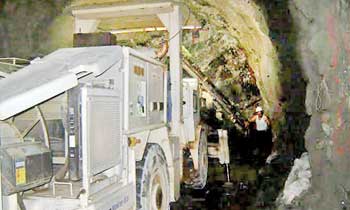 Norwegian expert Bent Aagaard who inspected the Uma Oya Multipurpose Development Project that had caused many problems in the Bandarawela area has said that the machinery used for the Project had not been capable of proper strengthening of the tunnel wall and to seal them with strong grout materials.

Mr. Aagaard made these remarks in the interim report submitted to President Maithripala Sirisena at the President’s Official Residence in Colombo today.

He further said the contractors had not been prepared for large scale water ingress in the tunnel. He advised that it would be necessary to get special grout material and machinery before remaining the four and a half kilometer stretch of the tunnel is dug as a part of it is below the residential areas.

He was of the view that a better comprehensive preliminary study could have prevented the water ingress into the tunnel leading to a severe water dearth in some areas.

Meanwhile, President Sirisena said it was regrettable that a series of problems had arisen during the project as the previous government had hurriedly commenced the project without proper study of the feasibility report and the Environmental Impact Assessment (EIA).

The President requested the expert to provide a full report on how the leakage could be completely stopped and the reasons for not taking into the consideration the water leakage in the previous reports; “The government plans to obtain expert advice prior to implementation of the next project in which a 22 Km long tunnel is to be constructed,” he added.