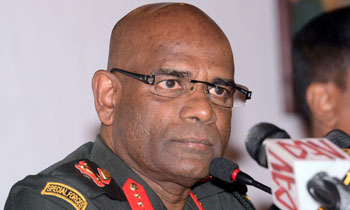 Army Commander Mahesh Senanayake said that they would not be conducting an inquiry the actions of the Defence Attache of the Sri Lankan High Commission in UK Brigadier Priyanka Fernando after he was spotted making a throat slitting gesture towards protesters who thronged the Embassy office in the UK.

He said he would update the President on what had taken place tomorrow(9).(Indika Ramanayake)