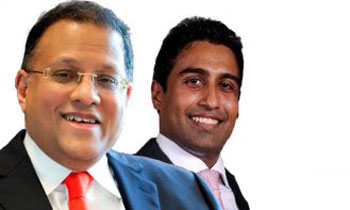 Responding to insinuations by “several persons”, the Bond Commission issuing a special statement said no phones of parliamentarians were “tapped” as alleged, and instead all the data revealed were from extracting data from the phones of Arjuna Mahendran and Arjun Aloysius.

The statement which was read out after the conclusion of the evidence of Prime Minister Ranil Wickremesinghe, stated that the extraction of the data was done on the orders of the Commission.

The statement said that the statements made alleging the tapping of phones were based on “misconceptions and are factually erroneous”.

Many of these statements appear to have been made based on misconceptions and are factually erroneous.

This examination revealed the telephonic contact and electronic contacts which Mr. Aloysius and Mr. Mahendran had with a large number of persons.

This entire process was based on the data found on the mobile telephones and other electronic devices used by Mr. Arjuna Aloysius and Mr. Arjuna Mahendran and also information provided lawfully by Telecommunication Service Providers.

The telephone records of any Member of Parliament were not obtained and were not examined.

With regard to the evidence led on the last day of proceedings- i.e. on 16th November 2017, only the dates and times of telephone conversations and electronic communications were produced in evidence.

The contents of any conversations or communications were not obtained and have not been produced in evidence before us.

In the case of Mr. Aloysius’ mobile telephone, some text messages had been extracted several month previously. Those text messages were produced in evidence in August of this year — i.e. more than 3 months ago.

The claims that the telephones of several Member of Parliament and other persons have been “tapped” or recorded in the course of this examination, are utterly false.

This Commission of Inquiry does not intend to make any further investigations in this regard as we have now terminated the reception of Evidence and will, from now on, engage solely in continuing with the preparation of our Report.

Our mandate does not require this Commission of Inquiry to embark on any such further investigation.