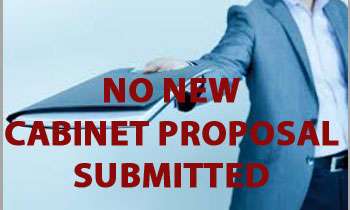 No new Cabinet proposal had been submitted by Prime Minister Ranil Wickremesinghe or any minister to handover the Colombo Port’s East Container Terminal (ECT) development to India, the Daily Mirror learns.

Reports earlier said President Maithripala Sirisena and the Prime Minister had a showdown at the Tuesday’s Cabinet meeting as the President was opposed to a proposal made to handover ECT Development to India.

Highly placed sources at the Government yesterday rejected the reports and said that Ports and Shipping Minister Mahinda Samarasinghe had submitted a fresh proposal to Cabinet on Tuesday to develop the ECT only by the Sri Lanka Ports Authority (SLPA), rescinding a proposal previously approved by the Cabinet in 2017 to develop the ECT under a Public-Private Partnership (PPP).

After taking into consideration the already signed MoU and granted Cabinet approval, the Prime Minister has requested the Cabinet to defer the proposal in view of his upcoming visit to India.

He had said that it is unwise to revoke an MoU unilaterally. Therefore, had requested time to take up the issue with Indian Prime Minister Narendra Modi and come to an agreement during his Indian visit which commences today (18).

Subsequently, the Cabinet of Ministers had agreed to postpone the new proposal for two weeks.

The source said Development Strategies and Internal Trade Ministry, which had submitted observations over the new proposal, had said that the government to government deliberations held between Sri Lanka, Japan and India should be considered when developing the ECT.

“In the circumstances, it is considered important to consider the decision on ECT development in the light of the discussions held at the highest level, while ensuring a commercially viable development model,” Ministry said.

The ECT development had been planned to take place in three stages; the first stage with Indian assistance, second stage with Japanese assistance and the third stage by Sri Lanka.

Prime Minister Wickremesinghe had highlighted at the Cabinet meeting that 80 percent of transshipments handling at the Colombo Port was from India and therefore, it would affect Sri Lanka if the signed MoU was rescinded. (Lahiru Pothmulla)