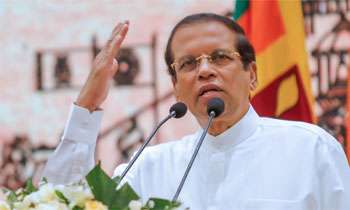 President Maithripala Sirisena said today that the present government has taken steps to establish a strong foundation for the free and fair elections in the country through the 19th amendment to the Constitution by ending the corruption that prevailed in the election system before January 8, 2015.

He made these remarks while addressing the inauguration ceremony of the Asian Electoral Stakeholder Forum (AESF) held in Colombo today.

The President said that the objective of the present government is to ensure the democracy in the country by holding all the elections of the country independently in a free and fair manner.

President Sirisena recalled prior to January 8, 2015, the election system of the country was corrupted and mentioned how the state media institutions were used violating the election rules in the 2015 Presidential Election and the way public funds were destroyed by using the Treasury for the victory of the election.