You are here: Home / Breaking News / No freedom of expression as bragged: SLPP – Daily Mirror 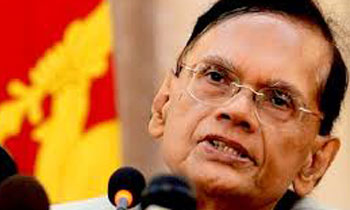 The Sri Lanka Podujana Peramuna (SLPP) said today, Anika Wijesuriya, a key witness in the Bond investigation had left the country due to death threats though the government said it had enabled an environment where anyone could criticize anyone without being subjected to intimidation.

SLPP Chairman Prof. G.L. Peiris said if it was not for Ms. Wijesuriya, the leasing out of penthouse by Arjun Aloysius in which former finance minister’s family resided in would not have come to light.

“This was a significant part of the investigation into Bond scam. A close relative of former minister Ravi Karunanayake had phoned and threatened the witness with death. In reality, sprats can be criticized but not sharks. When a shark is criticized, people receive death threats,” he told a news briefing.

He said the counsel of the Attorney General’s Department had bravely questioned and cross-examined all personnel who arrived at the Commission except for Ministers Kabir Hashim and Malik Samarawickrama.

“The two ministers were not questioned at all by the AG’s counsel. Asking brave questions revealed the truth about the Bond scam. When questions are not asked, it will affect the investigations. It is hard to think that the entire truth will be revealed now,” he said.

He said Prime Minister Ranil Wickremesinghe should also be questioned without being given a questionnaire to answer them in way of an affidavit.

Meanwhile, he said the police in the Northern Province is operated by the Tamil National Alliance (TNA). “The TNA, being the Opposition in Parliament, helps the government in delaying elections and the government rewards the TNA in return,” he said. (Lahiru Pothmulla)