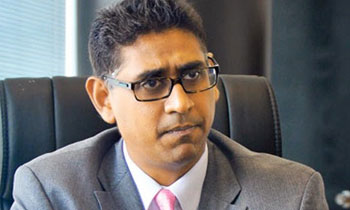 Addressing the media at the SLFP head office, Minister Musthapha said clauses 48/8 and 44/1 of the Constitution clearly say that if and when a No Confidence Motion against a Prime Minister was passed in Parliament, the PM must step down and the President must appoint as Prime Minister who commands the support of the majority in Parliament.

Responding to a journalist who asked him to comment on Minister Abeywardana’s claim, Minister Musthapha said the Speaker taking over the power in case the No Confidence Motion was passed in Parliament, was his wishful thinking.

Minister Musthapha said the Central Committee of the SLFP would take a decision before April 4 on its stance on the No Confidence Motion and added SLFP members would not take decisions individually but collectively as a party. (Sandun A Jayasekera)