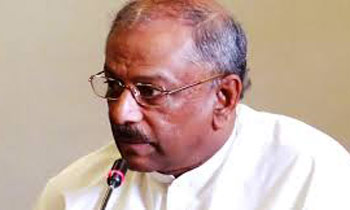 The joint opposition yesterday hit out at Tamil National Alliance (TNA) MP M.A. Sumanthiran for claiming that broad agreement had been reached on power devolution and as such the interim report could be now presented.

JO’s parliamentary group leader Dinesh Gunawardane told Daily Mirror that what Mr. Sumanthiran said was untrue. He said no agreement had been reached on key matters such as the presidency, power devolution, electoral reforms and the parliamentary system.

He said no decision had been taken on presenting the interim report with the JO and the Sri Lanka Freedom Party (SLFP) thinking diffeently on these matters. (Kelum Bandara)