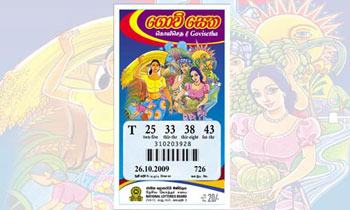 The National Movement for Consumer Right’s Protection (NMCRP) yesterday handed over a complaint to IGP Pujith Jayasundara over an alleged bogus lottery scam in the market.

NMCRP Chairman Ranjith Vithanage said the association received a ‘Govisetha Lottery’ which was not printed the draw numbers or any other security symbols through a customer.

He said the NMCRP suspects the particular lottery among one of the others that circulating in the market of the controversial ‘Govisetha’ lottery issue, could be a bogus lottery scam involved.

He had requested the IGP Jayasundara to probe the matter as there could be a possible lottery scam operating behind the scene that double-deal the customer and earn money.

Earlier this week the joint opposition revealed an alleged malpractice in National Lottery Board (NLB) lottery printing. JO parliamentarian Bandula Gunawardana said according to the Procurement Report 2016 issued on 2017, the Auditor General has exposed that the NLB had printed lotteries against the procurement process and called for an investigation.

Meanwhile, when contacted NLB Chairperson Shyamila Perera said the board lodged a complaint with the Crime Investigation Department (CID) about the matter and were investigating whether it was a mistake or deliberate scam.

Ms. Perera said the board issuing the lotteries to the dealers and before it receives by the customer it is going through the agent and the seller, therefore any mistake should be notified by them before it is released to the market and such lottery tickets with mistakes were returned to the board by them.

She said it is possible for someone to print an art work of the lottery however the board can detect any fraudulent lottery ticket with its barcode, QR code and security code.