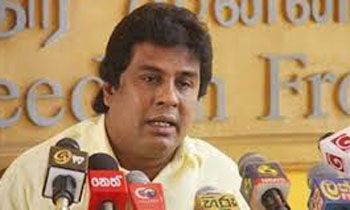 The National Freedom Front (NFF) today reiterated that Parliament should be bombed if it approves the Constitution by a two-thirds majority leading to the division of the country andclaimed there would be no need of a parliament if all the powers were transferred to the provincial councils.

NFF MP Jayantha Samaraweera told a news conference that theinterim report of the steering committee had proposed that land and financial powers should be given to the provincial councils while it also proposed that the powers vested with the governors be reduced.

“If the parliament approves this Constitution with a two-third majority, then the parliament should be bombed, lightning should strike it. There is no need of a parliament, a cabinet or MPs, “he said.

He said the NFF was formed to fight against the division of the country and added that they would struggle at the cost of their lives to prevent the country being divided. (Ajith Siriwardana)