Alien life could exist within our solar system as NASA reveals Saturn’s moon Enceladus has all of the ingredients for life after discovery of hydrogen gas, the Daily Mail reported a short while ago.

During a news briefing held today, NASA has announced the spacecraft Cassini had found hydrogen as a gas – the form needed to support single-celled organisms in the moon’s ocean.

This hydrogen is now said to be ‘a potential source of chemical energy that could support microbes on the seafloor of Enceladus,’ the researchers revealed during the news briefing.

‘We have made the first calorie count in an alien ocean. This is a major step in assessing the moon’s habitability,’ said Chris Glein, Cassini INMS team associate at the Southwest Research Institute.

The hydrogen, which shoots out of the moon in high-powered ice jets, is the final puzzle piece following the discovery of its liquid ocean and carbon dioxide.

It means Enceladus may have the same single-celled organisms which began life on Earth, or more complex life still. 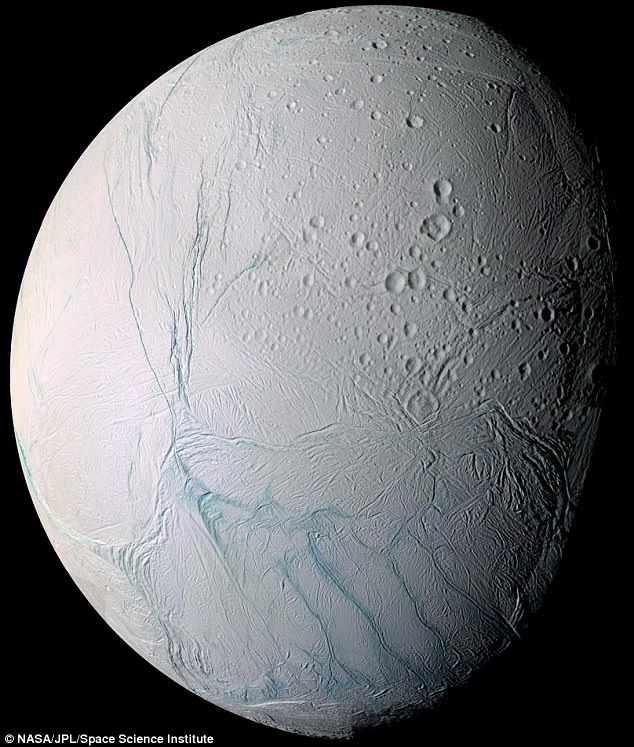 ‘This is the closest we’ve come, so far, to identifying a place with some of the ingredients needed for a habitable environment,’ said Thomas Zurbuchen, associate administrator for NASA’s Science Mission Directorate at Headquarters in Washington.

‘These results demonstrate the interconnected nature of NASA’s science missions that are getting us closer to answering whether we are indeed alone or not.’

Professor David Rothery, professor of planetary geosciences at The Open University, said: ‘We have now got all the ingredients we need to support life on Enceladus.
‘If we can prove this place where life could exist really does have it, that would be a huge discovery.

Alien life was once only thought possible on habitable planets within the ‘Goldilocks zone’ – far away enough from our sun not to be a fireball, but not so far as to be freezing.

Enceladus, a frozen moon almost 10 times as far from the sun as Earth, at 900 million miles, was one of the least likely candidates.

But in 2005 the unmanned Cassini spacecraft was orbiting Saturn when it picked up plumes of vapour coming from the ‘tiger stripes’, or deep fissures, in the moon’s surface.

This established that, while Enceladus is freezing on its surface, underneath is a liquid ocean.

The gravity from its parent planet pulls the moon out of shape, wherever it is closest, creating friction which heats the rock to 90C – enough to melt the ice into water.

Cassini, on its final mission before it runs out of fuel and is allowed to burn up its space, was sent diving deep into the jets.

After orbiting Saturn for 13 years, its ‘grand finale’ mission will end in September when it is diverted to crash into Saturn.

Meanwhile, Dr. David Clements, astrophysicist at Imperial College London, said: ‘This discovery does not mean that life exists on Enceladus, but it is a step on the way to that result.’

He added: ‘We need to know much more about the molecular species coming out of Enceladus and, ideally, that are inside it before we can make such claims.