In the aftermath of organised mob attacks on Muslims in Gampaha and the North Western Province, Muslims in Biyagama are still having sleepless nights in fear of a similar hostile backlash.

“We have no issues or differences with our neighbours, who are mostly Sinhalese, so far. We have lived in this area for several decades peacefully. After the attacks on Muslims, we are now scared to go out,” admitted Buhari Mohamed Rafik.

Born in Ratnapura, Rafik moved to Walpola, a small township in Biyagama, over 15 years ago after his marriage. Working as a small textile trader, he sells cut pieces from garment factories in Biyagama to his buyers who come from different parts of the island.

It is clear that when a community has done something wrong, it has to be cleared through that particular community. I have no problem even if the soldiers search my home over 10 times as I am not guilty of any illegal activity – Mohamed Shafi Mohideen

“As Muslims we were shocked to hear about the suicide bomb blasts in churches. Those who bombed those places were not Muslims. They have betrayed our community, religion, trust and our beautiful country for their extremist ideology,” the 57-year-old said.

In the aftermath of the Easter Sunday attacks, search operations have been conducted countrywide and it was no different in Biyagama as the Army, Commanders and Police joined together to carry out cordon and search operations last Wednesday.

Rafik said that the search operations gave them a sense of safety. Residents of the area who spoke to Daily FT said that they wanted to clear the bad impression foisted on Muslims after the Easter Sunday attacks that took over 250 lives and injured about 500 people.

They were thankful to the Army and the Police for searching every nook and corner of Walpola for illegal items including weapons and suspicious individuals. “We are happy with the military operation. We supported the soldiers to search our houses,” they said.

Condemning the Easter Sunday attacks that are believed to have been masterminded by Zahran Hashim, Rafik said true Muslims who believed in the teachings of the Quran would promote peace and unity and no one could go to heaven by killing people.

The military will launch special cordon and search operations again to hunt for possible sleeping cells of NTJ, their sympathisers and other extremists but we need the support of the Muslim community to nab the rest of the extremists who may still be at large – Maj. Gen. Sathyapriya Liyanage

“We live in this world for a very short period of time. So why do we fight for a religion or a separate State? There is no other country like Sri Lanka in the world that has given freedom to Muslims. Even though the military checked Sinhalese and Tamils, no one checked us until they blew up churches. People of this country trusted us a lot, but those extremists destroyed us and our future,” Rafik, who has lost more than 70% of his income from his business since the attacks, said angrily.

The eight-day special cordon and search operation commenced on 22 May from Hunupitiya North and South in Wattala. It covered Thihariya North, Thihariya South, Ederamulla North, Porutota in Negambo and Ederamulla South on 23, 24, 25, 26, 27 and 28 May respectively. The search operation was concluded in Biyagama on 29 May. Over 2,500 soldiers and Army dogs participated in the operation.

The ground commanders of the operation said residents and shop owners were very supportive throughout the special cordon and search operation as they also wanted to clear public doubts that they were supporting and harbouring extremists.

During this cordon and search operation, the military had found a madrasa run in a four-storey building, which accommodates 200 students from different parts of the country, in Porutota, Wattala. The military had allegedly found videos promoting extremist ideologies on the laptops and phones in the school, which had been registered under the Muslim Religious Affairs Ministry. The phones and laptops have been handed over to the Malwana Police for further investigations.

In Thihariya South they also found two religious schools. Each student paid Rs. 300 per month, which contributed to the teachers’ monthly salaries.

“Most of the children in the areas where we conducted search operations were attending Muslim religious schools, which have no qualified teachers, and lacked space as well as basic facilities. These children have no access to extra-curricular activities and no interaction with children in other communities. There are day schools and boarding schools,” they said.

Most of the poorer Muslim communities live in highly-populated town areas with condensed living conditions due to ad hoc construction. Some of these buildings have not followed basic regulations stipulated by Local Government authorities. With no space between houses, most of them live in poorly ventilated dilapidated dwellings. It is difficult to move in the narrow inner lanes among houses.

A former employee of a reputed company was also taken into custody for manufacturing five kinds of pharmaceutical drugs illegally in his home. Most of the Muslims in these areas covered by the cordon and search operation are engaged in different home-based, small-scale businesses, including making detergents.

“Women and young children are engaged in their family-based businesses, when they have free time. We have not seen any youth idling on the streets. Most of the houses are very small but each family has over four children,” officials said, remarking on their observations.

We live in this world for a very short period of time. So why do we fight for a religion or a separate State? There is no other country like Sri Lanka in the world that has given full freedom to Muslims. Even though the military checked Sinhalese and Tamils, no one checked Muslims until they blew up churches – Buhari Mohamed Rafik

The military had found 93 old ammunitions of a 12-bore gun from Finance Ministry Media Director Mohamed Ali Hassan’s house during the cordon and search operation in Malwana. The haul of ammunition was hidden in the roof. They also found two swords from his house. He had informed the Police that his father-in-law had had a licensed weapon earlier. He was taken into custody by the Biyagama Police and released later after questioning.

Mohamed Hassan Abdul Hafeel, who makes clothes hangers, said that he would be unable to pay salaries for his six workers as his income has dropped drastically due to boycotts and other issues that had arisen after the bomb blasts.

“Before April, I couldn’t supply the products to meet demand. We are now lost financially and mentally. That small group of extremists destroyed the future of the entire country. It has had a big impact on us as it has broken the trust between Muslims and other communities,” he lamented.

He said that Muslims couldn’t go out of their areas as they could be searched and people would look at them suspiciously.

However, other Muslim residents in the area had different views. Speaking on conditions of anonymity, they raised concerns of spreading conservatism in the Muslim community that was deeply linked to Middle Eastern forms of religious practice. These residents argued that Sri Lankan Muslims should be more focused on a Sri Lankan Muslim identity.

“There is no need for our children to learn the Arabic language, dress like the Middle East and follow Arabic culture as we were all born in this country, where we have been mixed with Sinhalese and Tamils for centuries. All these alien ideologies are being instilled in our Muslim youth by some interested parties, influenced by some of the Arabic countries in recent years. Today, this has resulted in pushing them into radicalisation and extremism,” they said.

Being small-scale traders in their mid-’60s, they said that their great grandfathers married Sinhalese or Tamil people and had no connection to any of the Arabic countries.

“We want to rebuild our image as Muslims. We want to regain trust. It is time for us to join together to fight extremists within our community to prevent this scourge spreading further,” they said.

For over 27 years, Mohamed Shafi Mohideen had worked as an assistant manager in the retail sector in the Middle-East but last July he returned to his hometown Walpola, to look after his three young children and also to start a retail business as the country’s economy was progressing.

“The tourism industry was booming and Sri Lanka was on a rapid development drive. Therefore, I invested my savings to open a textile shop and also rented two shops in my building. Unfortunately, everything has collapsed with this barbaric act by that small group of ideologists. Islam doesn’t permit any harm. As Muslims, we are very disappointed and feel ashamed but are optimistic that this situation will return to normalcy soon,” Mohideen, who studied in a popular school in Colombo, said.

He said those who bombed the churches and hotels were radicalised people but not Muslims, who loved Sri Lanka and had lived peacefully with other communities for centuries.

“Sri Lanka is a precious country, which is blessed with the world’s best cinnamon and natural water. We are proud to be Sri Lankans. I urge all people to learn to tolerate each other, know cultural differences, respect each other and work together as a nation. If we are united, we can resolve many differences. But I believe all politicians need to be honest,” he said.

Mohideen opined that all Muslims should help the security forces to search their houses and mosques as the situation was created by a group of ideologists who called themselves Muslims.

“It is clear that when a community has done something wrong, it has to be cleared through that particular community. I have no problem even if the soldiers search my home 10 times as I am not guilty of any illegal activity,” he said.

He told the Daily FT that the search operation was conducted in vulnerable areas in the Western Province, which are suspected of having hideouts for extremists, their sympathisers and their weapons and explosives.

“We conducted the cordon and search operation using a large force to prevent extremists fleeing or transferring the illegal materials while the operation was progressing,” he said.

According to Maj. Gen. Liyanage, the intention of launching the cordon and search operation was mainly to build confidence in public that the military had cleared the vulnerable areas and also to ensure public safety.

“Secondly, to give relief to fear-stricken moderate Muslims, whose image was tarnished after suicide bomb blasts by the extremists and also other communities including Sinhala families living in those areas. My ground commanders informed me that people in all the areas were very supportive and willingly assisted to search their houses. The military has now assured safety of those areas and they can live without any fear,” he said.

Maj. Gen. Liyanage said that the extremist NTJ group had been reduced by 98% with eight hard-core suicide bombers killed at series of bomb blasts and over 200 suspects, including their hard-core members and supporters, being taken into custody by the security forces.

“People have faith in the security forces as we ensured islandwide safety soon after the bomb blasts and also mob attacks. While we are having our routine search operations, we will launch special cordon and search operations again to hunt the sleeping cells of NTJ, their sympathisers and other extremists,” he stressed.

The OOC Chief said that it was difficult to identify extremists from ordinary people but the security forces expected more assistance and support from the Muslim community living around the country to nab the rest of the extremists who may still be at large. 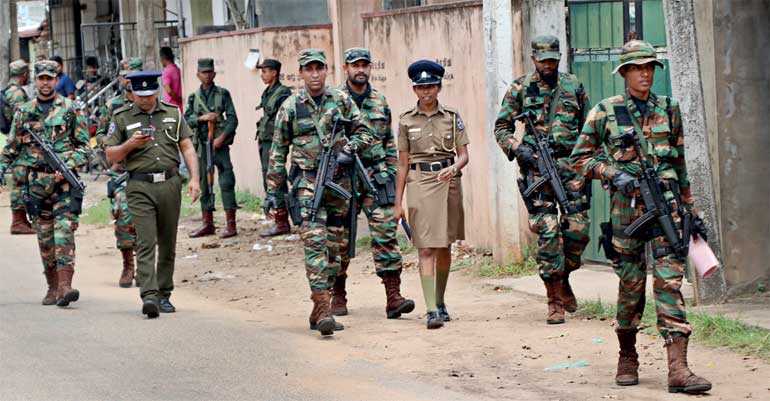 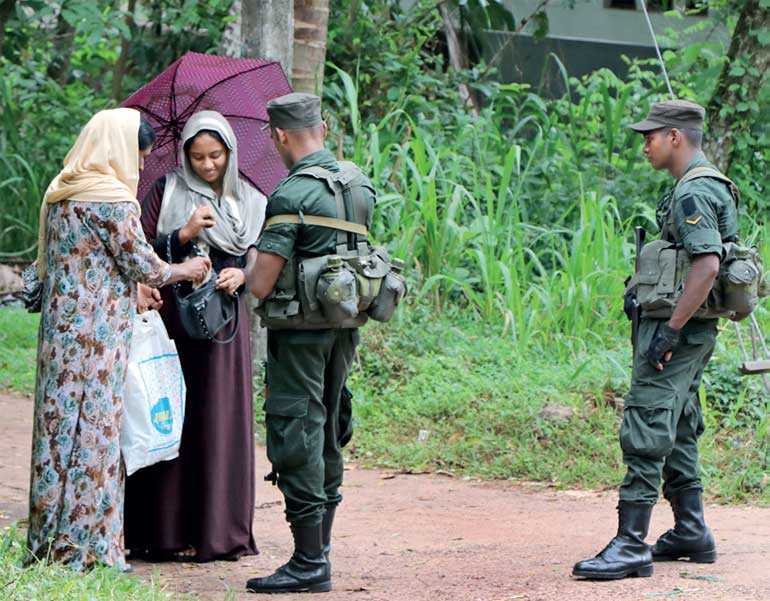 At the search operation in Wattala 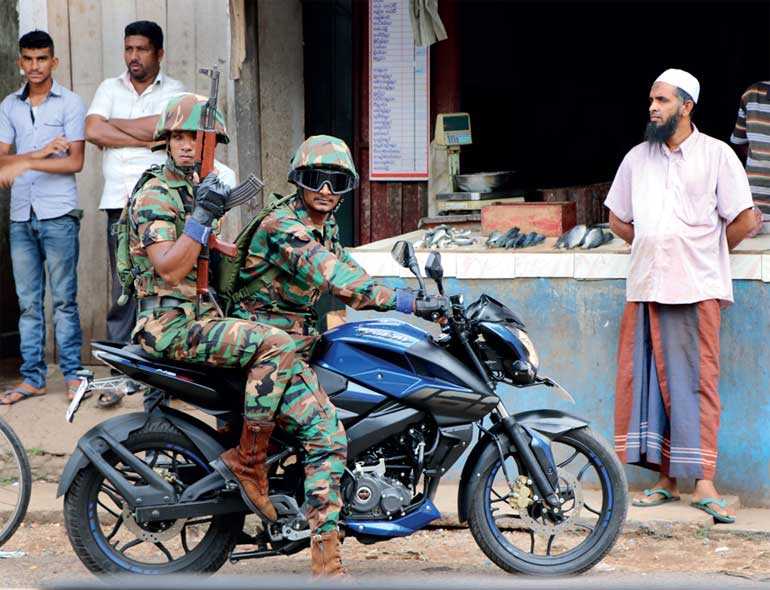 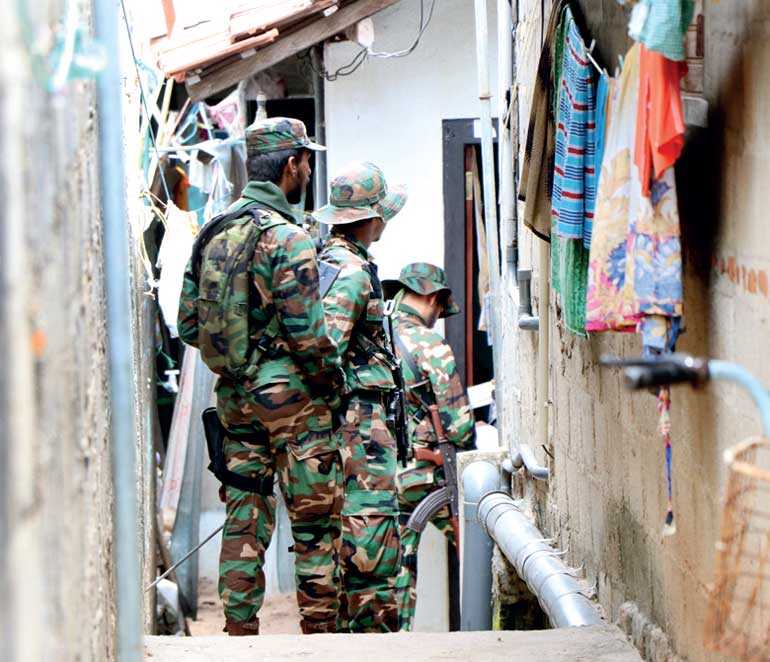