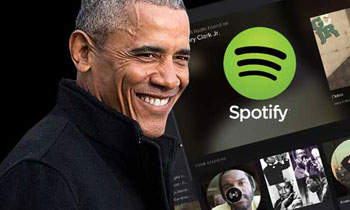 Days before US President Barack Obama ends his final term at the White House, the soon-to-be unemployed world leader was already being lured by music-streaming site Spotify.

On Jan 9, the website's jobs section posted a vacancy for a “President of Playlists” position requiring “eight years experience running a highly-regarded nation” as well as a Nobel Peace Prize.

Tailored to Obama's career, the tasks include identifying new playlist ideas, “from a playlist for shooting hoops with your friends, to the perfect warm up playlist for addressing the nation about healthcare legislation that bears your name.”

The US President, who has collected more than 400,000 followers on the music-streaming site since his first public playlist in August 2015, had previously joked about working at Spotify after the presidency.

According to the wife of the US ambassador in Sweden, Obama told a gathering of diplomats that he was “still waiting” for a job at the Stockholm-based company.

“I heard you were interested in a role at Spotify. Have you seen this one?” the platform's co-founder and chief executive Daniel Ek later said in a tweet to Obama.

Referring to the “birther” movement conspiracy about the president's birthplace, the “President of Playlists” post also calls for enough familiarity with the software to create an “I just found my birth certificate” playlist.

Obama, who is set to continue work on the Obama Foundation's presidential library, has yet to confirm his plans after he leaves office on Jan 20, when his successor Donald Trump, a key figure in the birther conspiracy, is inaugurated.

Obama has been an active user of Spotify since officially joining in 2015, collecting thousands of followers for his summer mixes and “Official Inauguration Playlist.” (The star online)