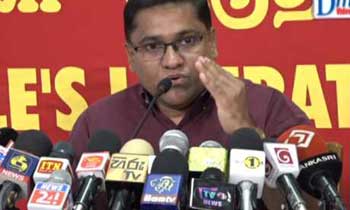 While claiming that President Maithripala Sirisena had no moral right to contest the presidential election again, the Janatha Vimukthi Peramuna (JVP) said today they would defeat him just as the former president Mahinda Rajapaksa if he contested the election breaking his pledge to the people.

JVP MP Vijitha Herath said the President should reveal his stance on the abolishing of the executive presidency.

Mr. Herath told a news conference that the JVP had submitted nine amendments to the interim report submitted by the Steering Committee in the Constitutional Assembly including the abolishment of the executive presidency.

He said the draft bill of the Constitution would be based on the matters agreed by all parties whereas there had been different views on it.

“The Draft Bill of the Constitution would not be based on contradictory views. It would only be based on the matters agreed by all parties. We as the JVP assure the people that we will never allow anyone to divide the country,” he said.

“Different people hold different views on the interim report. There had been different views on executive presidency, state structure, the priority given to Buddhism, unitary state, power of the governor and power of Provincial Councils. All these matters are under discussion,” he said.

He said certain bankrupt political forces were trying to create bugbear among the people on the interim report and asked them not to get deceived by such groups.(Ajith Siriwardana)