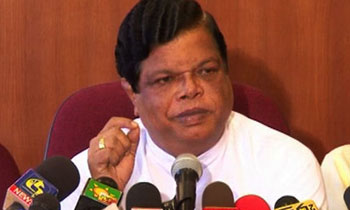 The latest Central Bank (CB) report for the year 2016 clearly indicates that current economic crisis was not a result of the action of former President Mahinda Rajapaksa or his government, the Joint opposition claimed yesterday.

Addressing a press briefing, MP Bandula Gunawardane said nearly two and half years has passed since the Unity government came in to power and still they are struggling to resolve the economic issues.

MP Gunawardane said by importing crude oil present government had to spend US Dollar 2.7 billions and 2.4 billions in 2015 and 2016 respectively when former President paid US Dollar 4.5 billions only for year 2014 due to price fluctuations in the international market.

He said the former President never sold the country or its resources to any other foreign nation during his ruling despite the country was embroiled with a civil war and so many economic issues.

“It is misleading that country cannot proceed when there is a state debt crisis. It is the present government’s lack of efficiency in the state debt management. As the Finance Ministry failed to manage the economy they are continuously putting the blame on Mr. Rajapaksa,” he said.

Further, he said the Rupee had depreciated to a lowest ebb during the last two years as a result of Finance Ministries short term surviving policies launched to keep the US Dollar value around Rs 135.

Therefore, MP Gunawardane said no one can accuse Mr. Rajapaksa that he is responsible for the recent economic turmoil and the CB 2016 annual report endorses this facts. (Thilanka Kanakarathna)